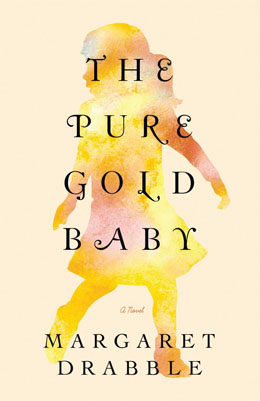 Margaret Drabble, now 75, came of age in 1960s and 70s England, and over the course of twenty plus books she has repeatedly sought to capture the social tenor of those times, though her unfailingly feminist, left-leaning perspective has occasionally led to accusations of intransigence. “Drabble’s idea of social fiction” the critic James Wood wrote in 1997, “…seems to demand that characterization must be angry typology.”

Drabble declared her retirement from fiction writing in 2009 on the grounds that she feared repeating herself, so the appearance of a novel just five years later suggests she found something new to say. Indeed, though in its focus on a woman whose academic career is put on hold by single motherhood The Pure Gold Baby fits the classic Drabble mold, the novel has a retrospective, almost conciliatory tone that sets it apart from some of her previous work: “How smug we were and how self-righteous. What ideological prigs we were,” says the Drabble-aged narrator, Nellie, looking back on her 1960s youth.

On a trip to Africa during that decade, Nellie’s friend, an earnest young anthropology student named Jess, has a life-changing experience with a group of children suffering from the hand deformity known as lobster-claw syndrome. What strikes Jess most about the children’s disability is their near-indifference to it. Later, she comes to see in the encounter a foreshadowing of her experience as a single mother to Anna, a child born with such a preternaturally calm and sunny disposition—she is referred to as the “pure gold baby”—that it initially blinds her to Anna’s crippling mental limitations.

Though it’s vaguely like Down’s Syndrome and then-barely-known autism, Anna’s condition doesn’t fall easily into any category. Happy and irrepressibly social, she can’t stomach conflict of any kind. Over the years Jess’ friends experience various struggles with their children (addiction, thuggishness), yet Anna’s yielding amenability creates a different kind of paradox: “Anna…made no progress at all. She was becalmed. There was no story to her life, no plot.” She is, in other words, the kind of girl that novels don’t get written about; even this one is about her mother.

Nellie narrates the story using the collective “we.” At times this refers to her and Jess’ generation as a whole—Nellie offers a running commentary on changing times on topics ranging from downsizing to reading groups to politically correct terms for mental disability. At others, it refers just to Jess’ circle of friends in a way that emphasizes—in the manner of The Beatles’ “She’s Leaving Home”—how much she had always stood apart (What did we do that was wrong?)

Jess’ life goes on: she marries then abandons the marriage, has a brief affair with a Sudanese intellectual, resumes a watered-down version of her career—each decision informed by Anna, her forever child and undeclared millstone.

But Jess’ devotion isn’t the mawkish, crusading mother’s love of American dramas, it is, rather, what she refers to at one point as “hopeless parental love”—“hopeless” here having the dual sense of “uncontained” but also “without hope”: like all parents of the mentally and physically challenged, Jess faces a comfortless old age knowing she can’t control what will happen to Anna after she dies.

As the parent of a special needs child myself, I found Drabble’s take on the subject layered and—though it may sound odd to say so—refreshingly desperate. Nellie’s role and motivation as apologetic narrator is far less convincing, though it’s a flaw significantly offset by a rich, interesting cast of secondary characters with nary a sign of angry typology.