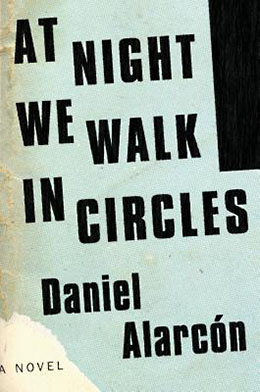 AT NIGHT WE WALK IN CIRCLES
by Daniel Alarcon

Daniel Alarcón was born in Peru, raised in Alabama and currently lives in San Francisco—an unusual migratory path that has presumably contributed to the unique, dispassionate writing style that previously landed him on both Granta and the New Yorker’s best young writers’ lists.

Alarcón’s ability to meld the general and the specific in intriguing ways is part of the appeal of his propulsive new book, At Night We Walk in Circles. Like his previous novel, Lost City Radio, this one is set in an unnamed South American country (why do so many South America-set books and movies take place in unnamed countries?) though he tends to be precise about other things, such as where or how old characters were on certain dates. At the same time, real historic events fall away. I think this is the only novel I’ve read that takes place over 9/11 but doesn’t make reference to that event.

Nelson, a struggling actor in his early twenties, has just won a coveted spot with Diciembre, the legendary guerrilla theatre troupe founded by his idol, Henry Nuñez. The troupe plan to remount and tour Henry’s signature three-man play “The Idiot President” which, during the war that gripped the country when Nelson was a child, was considered so treasonous that it landed Henry in prison. Now divorced, Henry has spent the intervening years in a low-key teaching job while driving a cab at night, his time in prison having quashed whatever radicalism he once had. And though the war hasn’t been over long, the “narcotic effects of peace” mean that Henry and his play have largely slid into obscurity.

In preparation for the tour, Nelson breaks up with his girlfriend, Ixta, and immediately regrets it, especially after she takes up with another man. He must also leave his mother, whose care he dutifully assumed after his father died a few years back.

Moving from move from town to town, the trio find themselves playing to small but receptive audiences. Henry is an unpleasant combination of petty, moody and tyrannical—he’s particularly angry about leaving his beloved daughter behind. When the tour takes them close to the hometown of his long-dead lover from prison, Rogelio, Henry announces a detour there without explaining why.

It’s here that things begin to take an absurdist turn. Henry pays a call on Rogelio’s mother only to discover that the old woman, who’s suffering from dementia, is unaware her son died 17 years ago. Furious about his mother’s distress, Rogelio’s gangsterish brother shows up and insists that Henry make amends by having Nelson move in and perform the role of a returned Rogelio. Nelson is unexpectedly amenable to this, though after his friends leave he finds himself torn between his loyalty as a fake son and his increasing obsession with Ixta, who he learns is pregnant.

The novel’s title refers to the circles Henry used to walk in jail as a way of avoiding its dangerous elements, but circles and circularity inform it at every level—they radiate especially from the various testing of loyalties, both between characters and within “The Idiot President,” that occur throughout its pages. By atoning for the sins of his idol, Nelson completes one of these circles. The novel’s conclusion closes the biggest one of all.

At Night We Walk in Circles is written as reportage with the identity and motivation of the narrator coming to play a central role in the unfolding mystery. Heavy foreshadowing throughout makes it clear things won’t end well for Nelson, and part of the enjoyment of this delightfully strange and often riveting book is guessing which of its many moods—irony, humour, suspense, absurdity—will prevail.