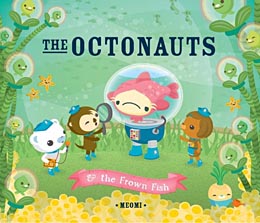 THE OCTONAUTS & THE FROWN FISH
by Meomi

The Octonauts & the Frown Fish is the third installment in a series of picture books created by the Vancouver/L.A.-based design duo Meomi, whose trendy Pokemon-meets-Brueghel-meets-Hello Kitty sensibility has made their commercial work a worldwide success.

Meomi describes the Octonauts as “a team of eight adorable undersea explorers (including a brainy octopus, a big-hearted penguin and a daredevil kitten) who are always ready for new and exciting voyages.” This time out, they discover a “Frown Fish,” whose dolour, worrisomely, is starting to rub off on other sea creatures. The team tries a variety of methods to cheer up the Frown Fish, until he is finally discovered to be an upside-down catfish who has, in fact, been happy all along.

The charm of this narrative twist and the considerable achievement of  Meomi’s meticulous artwork are undermined by a number of factors. The whimsical  illustrations, relying heavily on pastels and eschewing true blacks  and whites, lack depth, and fail to draw the reader’s eye around the page, resulting in a barrage of competing information. Overall, the  book’s perfect gradients and unerringly smooth lines lack any real  warmth or idiosyncrasy – which makes it hard to identify with  the undeniably cute, but generally expressionless, characters.

One has to assume, also, that the authors did not try reading aloud such awkward invented terms such as “clamcapella group” or “sea horchestra.” In the end, we’re left with the sense that Meomi is more concerned with pleasing its design audience than its child readers. This is a book to be admired, not loved.