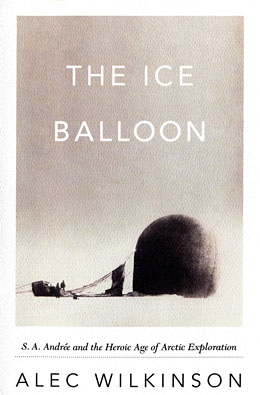 THE ICE BALLOON:
S. A. Andrée and the Heroic Age of Arctic Exploration
by Alec Wilkinson

A 19th century Arctic expedition in which three explorers set off in a massive hydrogen balloon only to vanish forever when their craft disappears over the horizon may not seem like obvious fodder for a full-length book. Yet in The Ice Balloon author and New Yorker staff writer Alec Wilkinson gives us not only an exhilarating account of Swedish engineer S. A. Andrée’s ill-fated expedition, he offers a finely nuanced psychological portrait of a unique race of men—the Victorian-era Arctic explorers—and the age that produced them. Wilkinson’s is that rare work of non-fiction (Joe Simpson’s Touching the Void is another) whose sublimely understated writing rivals the inherent drama of its subject matter. Not for Wilkinson the Inception-esque one-sentence paragraph or the coquettish lure of the exclamation point. Yet his book couldn’t be more riveting.

In the “parade of fanatics heading for the deep places” Wilkinson finds not so much a type as a multiplicity of personalities, “men whose neurology was sufficiently deadened that only the most profound experiences could stir them.” One quality that set the Arctic explorers apart was the nature of gratification they sought. Unlike other destinations, the Arctic’s treasures were more intellectual than tangible. In contrast to the mineral wealth of the tropics, for example, the Arctic’s most obvious reward—aside from death—was the fame that would come with being the first to set foot on this “spooky and capacious territory of the imagination.” Selfless heroism and an abiding belief in the ability of science to improve man’s lot were at the heart of most expeditions. They were certainly at the heart of Andrée’s.

Blessed with Nordic good looks and a wide-ranging intelligence, Andrée was by nature solitary, stubborn and confident. “He appeared to feel,” Wilkinson writes, “that nothing that interested him was beyond his ability to have an opinion about it.” An engineer by trade, he was the first to propose the concept of using a balloon to fly over the pole instead of dragging himself there by sledge, as his precursors had attempted to do.

In 1897 no one knew whether land, ice, sea or a gaping hole would greet them once they reached the pole. Andrée’s research had convinced him that using a balloon would allow him to arrive there in a matter of days or hours, instead of over the course of months or years (the very brevity of the proposed expedition offended some geographers and explorers, who felt that the journey should, on principle, be arduous).

Wilkinson spends the first part of the book recounting the harrowing experiences of two of Andree’s predecessors—the American lieutenant Adolphus Greeley and the Norwegian explorer Fridtjof Nansen—both of whom survived, though just barely, to tell their tales. The majority of their crews perished in the most painfully attenuated ways imaginable. It was not until the discovery of Andrée’s remains in 1930, 33 years after he disappeared, that his journals finally revealed what took place in the aftermath of his departure from Norway’s Spitsbergen Island.

Knowing what’s to come, it’s with a numb sense of dread that we read about Andrée’s laborious preparations. In a series of scenes that could have been outtakes from the movie Up, his journals describe the initial euphoria of flight and his crew’s persistent optimism even after their craft crashed down on an ice floe about 300 miles from the pole. The haunting photo of the collapsed balloon that appears on the book’s cover came from a film reel discovered amongst the crew’s remains, which adds considerably to its ghostly quality.

Wilkinson believes that over the course of his preparations, Andrée underwent a species of conversion from the aloof, disengaged scientist to the wild-eyed fanatic who left because he couldn’t imagine not leaving. It had all the elements of a gruesome fate and a fascinating tale.