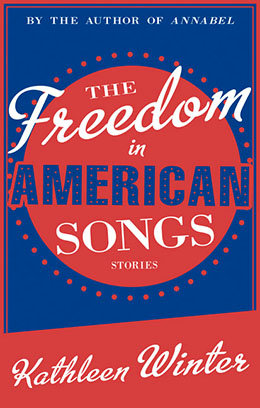 THE FREEDOM IN AMERICAN SONGS
by Kathleen Winter

This is a big year for Kathleen Winter. In the space of a month she has doubled her career output with fraternal twin books, neither of which is—like her hit Annabel—a novel. Boundless, a memoir documenting a 2010 voyage she took through the Northwest Passage (and which lines up eerily well with the recent Franklin Expedition discoveries) is her first work of non-fiction, The Freedom in American Songs her second short story collection.

What unites these tales is the loneliness and isolation that besets their female characters. Some of this stems from the kind of physical uprootedness that has characterized Winter’s own life trajectory. Born in England, she moved to Newfoundland at an early age then to Montreal in adulthood—all places whose singular cultural identity can make them resistant to outsiders. Unsurprisingly, they furnish many of the story locations in the book.

The most showstoppingly exquisite writing comes at the beginning, in Winter’s three “Marianne stories” (a series of which appeared in her previous collection, boYs). Our eponymous protagonist is a writer who has left the city to try her hand at her putative craft in a tiny Newfoundland cove town, a place where women “did not go outside except to hang their washing, go to mass, or get groceries.” Although to some degree Marianne embraces her outsider status knowing it lets her see things others don’t, the elation she gets from the simple achievement of building a fire that burns the same white smoke as her neighbours’ bespeaks a deeper need to belong.

So delightfully unexpected is the syntax of these stories, so nuanced their level of observation, that the effect of reading them is akin to hearing someone speaking in tongues: “the islands called to each other with omnipresent gonglike voices”; the tide is the sea “sucking at the beach.” Nature entwines itself kama sutra-like through Winter’s phrasing: “she liked the hum and drone of the women of the cove saying their rosary like bees among the cove’s roses”; or “the comet was a blur, hardly illumined, a stain of milk spilled on a black coat and only half sunk in.”

The (purposefully) plainer-prosed tales in the book’s remainder come to us in various states of narrative undress. Some, like the title story, in which our protagonist encounters the man with whom he had his only gay sexual experience 37 years previously, feel fully decked-out while “The Zamboni Mechanic’s Blood,” is a scantily clad two-and-a-half page after-work conversation between a husband and his wife.

Winter’s women have a propensity to imagine the lives of others and to be wrong about them. In “You Seem a Little Bit Sad,” the connection a woman in the midst of a depression senses between herself and her Middle Eastern butcher vanishes as soon as the latter casually mentions his upcoming move New York with his family and that he’s Mexican, not Middle Eastern.

Sometimes, like Claire in “Anhiga,” they’re wrong about themselves. “Why had she imagined solitude was a thing she wanted,” Claire asks herself during “a fortnight of tortuous loneliness” in Florida in which she manages to get stuck in an alligator-infested mangrove at night: “She was a woman who did not know the first thing about her own temperament.” And sometimes it’s we who are wrong about them, as in the case of “Flyaway,” whose 76-year-old protagonist—an unmarried woman who gets accused of mistreating the young girl she becomes guardian to in England during the war—proves deeply unreliable.

Winter’s uniqueness as a writer lies partly in her resistance to conventions like narrative arcs and wrap-uppy endings. In “Knives,” whose climax occurs when the narrator watches her neighbour realize that her husband has an illegitimate teenage son, the payoff is in metaphors, the narrator glimpsing “furniture and other large pieces of equipment being shifted within the darkness of her watchful eyes—stagehands clad all in black moved silently in that darkness rearranging her set.”