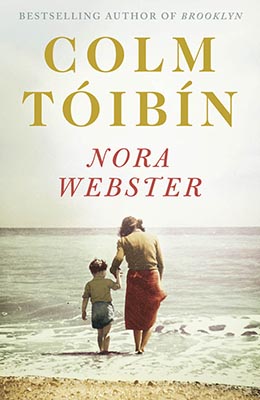 Much of the power of Colm Toibin’s writing comes from what’s left unsaid. That’s literally the case with Nora Webster, the eponymous heroine of his beautiful new novel, a recently widowed mother of four who, especially in the book’s early parts, asserts herself through taciturnity: she carefully considers what to say but often chooses to say nothing at all. You could consider that a form of risk-taking, given that fiction’s most memorable female characters have tended to be either Sturm-und-Drang types (Emma Bovary, Anna Karenina, Lisbeth Salander) or the pluckily sharp-witted (Elizabeth Bennett, Anne Shirley, Becky Sharp). Nora doesn’t fit into these or most other categories, but she’s just as indelible.

Toibin’s minimalist style has little in common with the maximalist one of Henry James, the subject of what many consider the Irish author’s greatest novel to date, The Master. Still, T.S. Eliot’s famous compliment-disguised-as-barb about James, that “He had a mind so fine no idea could violate it,” applies equally well to Toibin. Set in late-1960s rural Ireland where “The Troubles” are just starting to rear their head, Nora Webster percolates with politics, yet the latter are something of a red herring: what’s of importance is rarely stated directly. Instead, Toibin bounces his narrative ball indirectly off walls; if his novels were racquet sports they would be squash, not tennis.

On the odd occasion he lapses into directness, it’s to confirm what’s already been communicated in subtler, more interesting ways. Nora’s intelligence is referred to, third-hand, by her boss’ daughter Elizabeth, who describes how Nora’s sister implored her new boyfriend not to talk about golf in Nora’s presence because she was “highly intelligent” (nervous, he ends up speaking of nothing but). And though it gradually becomes clear that Nora isn’t shedding the carcass of a bad marriage, but a very good one, it’s only in the book’s final pages that we (and she) overhear her sisters refer to her schoolteacher husband, Maurice, as “the love of her life,” a phrase far too hyperbolic for Nora herself to have uttered.

Marriage had—unlike for many women of her era—meant freedom for Nora. Among other things it had allowed her to quit her job keeping books at the family-run mill where she worked after her own mother was widowed, a job to which she must now of necessity return. Even good marriages, of course, demand a certain sacrificing of self, and what guides Nora Webster (“plotted” being too strong a word) is Nora’s oft-repeated wish to learn, simply, “how to live.”

Toibin’s approach has always been to take care of his narrative pennies and let the dollars (or pounds) take care of themselves, and so it is that Nora’s confidence is inexorably built through a series of decisions made both on instinct and on impulse. The first of these is to sell the family’s summerhouse. By the time the novel nears its end, she’s sufficiently emboldened to threaten to stage a protest when her anxiety-ridden, stammering son Donal (based on Toibin himself) gets demoted at school.

Her instincts often rub up against social conventions. Looking in the mirror after getting her hair dyed and cut, she knows she will be judged for its unwidow-like modishness, yet makes no attempt to hide it. She joins the fledgling union at her workplace, only later realizing that her employers, who have bent over backwards to take her on, will view it as a betrayal (“Perhaps it was not wise; perhaps it made more sense to be grateful to the Gibneys. But it pleased her now to be grateful to no one.”) To most of the outside world Nora appears stubbornly unhesitating, so the fact that we are the privileged witnesses to her moments of self-doubt only heightens our sense of intimacy with her.

Though he’s spent much of his career writing about relationships between mothers and their children, in his last three novels Toibin has invested fearlessly in his female main characters. There are certainly shades of Nora in Eilis Lacey, the young Irish protagonist in Brooklyn who emigrates to America solo and bravely establishes a life there (until duty calls her back). In the way she sometimes allows her need for self-preservation to trump the needs of her children, Nora also conjures the fiercely unsentimental Mary, mother of Jesus, from the 2012 novella, The Testament of Mary.

Nora Webster has the feel of a coming of age novel, but that hardly makes technical sense given that Nora is in her late forties. Her transformation, at any rate, is more slippery than that: another aspect of Toibin’s genius is his ability to switch emotional octaves without altering the notes he is playing. Music, it just so happens, ends up playing a key role in Nora’s reinvention of herself. But Toibin not being one to peddle in the language of personal redemption, it’s a pursuit that in some ways serves to increases her isolation: “…she realized that the music was leading her away from Maurice… But it was not merely that Maurice had no ear for music, and that music was something they had never shared. It was the intensity of her time here; she was alone with herself in a place where he would never have followed her, even in death.”