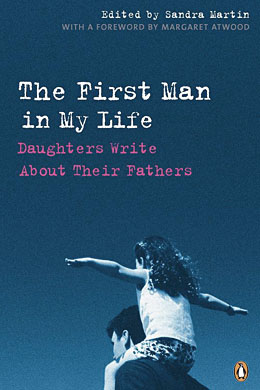 THE FIRST MAN IN MY LIFE:
Daughters Write About Their Fathers
by Sandra Martin

In her introduction to this excellent collection of short essays by prominent Canadian women about their fathers, editor Sandra Martin admits that finding a title that “didn’t imply incest as an overarching theme was an onerous struggle.” But surely, Sandra, one shouldn’t give up entirely?

Once past the book’s cloyingly Hallmark (and vaguely creepy) title and the sentimental photograph on its cover, the reader is rewarded with a rich trove of essays that are striking for their focus, frankness, and economy. In fact, the writing is so consistently good that it’s hard to single any of it out for special praise. That being said, Camilla Gibb’s piece about the role her absent father has played in her novels, and Marina Nemat’s account of her father’s refusal to acknowledge her time as a political prisoner in Iran, are both highlights. And despite Martin’s titular concerns, none of the essays here deal with incest, although several do confront abuse.

Like Martin, many of the book’s 22 contributors are journalists, including Christie Blatchford, Tina Srebotnjak, and Pamela Wallin. Novelists are also well represented, with Anita Rau Badami, Emma Richler, Eden Robinson, and Susan Swan all weighing in. While the real interest of the essays lies in the very personal details of the lives they depict, what one comes away with are the overall similarities. The unreliability of memory is a constant theme, as is the fact that most of the fathers in the collection are dead – no doubt a precondition for many of the writers. But whether written with love or resentment, each essay exudes a need for a reckoning with this fundamental relationship.

This is a timely book for a society in the process of reassessing the role of a father. Many of the contributors are from the not-so-long-ago era when fathers were expected to be simply breadwinners and, occasionally, disciplinarians. It is clear that most of the authors expected their dads to play more than just a shadow role. Their own successes and failures speak volumes about the part this often emotionally enigmatic relationship has played in their lives.