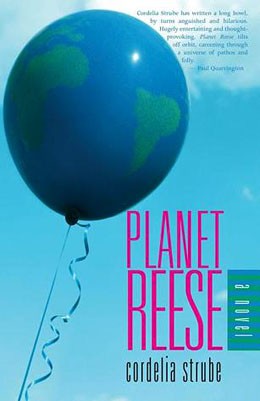 With this, her seventh novel, Cordelia Strube carries on with the brand of dystopic fiction that has become her trademark. The Strubian novel can be characterized thus: it has an ensemble of emotionally or physically crippled characters who are invariably urban and oppressed by, and obsessed with, specific aspects of the day’s dark headlines. Lots of different (bad) things happen to them, some of which are large and dramatic, like murder or cancer or cars driving into houses. And a Strubian novel is both highly topical and full of dark humour. 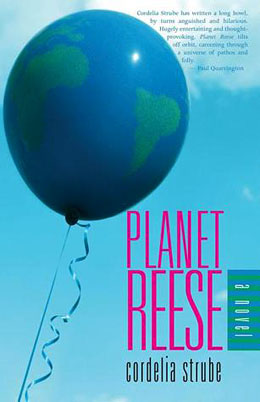 With Strube, the devil is in the details, and there are plenty of them to go round. She has a fondness for life’s minutiae that turns the task of plot summary into a kind of sadistic leghold trap for reviewers.

The protagonist here, Reese, is in the final throes of his marriage, a disaster brought on largely by his killjoy stridency and intransigence on all matters environmental. As the story begins, he is travelling back by plane from what is to be his last vacation with his wife and two children. During the course of the flight, he inadvertently kills a man while defending a pregnant flight attendant against unwanted sexual advances. The man is immediately labelled a terrorist by the press, and Reese is declared a vigilante hero.

His newfound hero status notwithstanding, Reese finds himself living in a damp basement apartment in the aftermath of his marital breakdown, plagued by the constant fear that mildew will soon spread from his floor to his futon. Fired from his previous job at Greenpeace, Reese now fundraises for a marketing firm, where he helps write phone scripts flogging various diseases-of-the-month. To make things worse, he receives a letter from his wife’s lawyer implying that he has been molesting his daughter Clara, a conclusion drawn from his wife’s observation that the girl has recently taken to inserting things into her dolls’ bottoms.

All around him Reese sees signs of imminent environmental, social, and marital collapse. He finds himself drawn to headlines depicting oil spills or husbands driven to murder their families in fits of jealous rage. Between periodic self-righteous outbursts, Reese decides to embrace this sense of futility by willfully littering and forcing himself to eat junk food. Unable to sleep, he becomes obsessed with buying the perfect bed. His visits to mattress stores become daily rituals in which he tries to process the advantages of coils, springs, or foam while dealing with hostile sales clerks.

Despairing that he will never be allowed to see his children again, Reese takes to stalking his family at night, spying through windows and sometimes sneaking upstairs to gaze at his sleeping daughter and fantasize about bludgeoning his soon-to-be-ex-wife.

Reese gradually finds himself drawn into the life and apartment of his upstairs neighbour, a young woman named Katrina who works at a topless bar but dreams of Hollywood. They platonically bond over old Fred and Ginger movies and start attending ballroom dance lessons together. Needless to say, even this potentially happy situation deteriorates.

Strube charts a perilous course that lurches between a kind of kitchen-sink realism and caricatured pastiche that – for better and often worse – evokes writers such as Douglas Coupland and Zadie Smith. Planet Reese starts out promisingly but is far too drawn out; much that is clever and insightful gets snuffed out by the numbing repetition of elements and themes. The dialogue is one of the novel’s strong suits, and the passages describing Reese’s feelings of loss and love for his children are among some of the book’s truly poignant moments. The sincerity of these episodes often sits uneasily, however, amid the prevailing cynicism of the story as a whole.

There are also some structural problems, including times when the narrative point of view shifts too abruptly and confusingly. In one chapter, Reese plunges onto the subway tracks to prevent a woman’s suicide. The woman is Muslim, and Reese momentarily imagines that she is the wife of the man he killed on the plane, thus absolving him of his guilt over the incident. The drama of the gesture – quickly forgotten in the forward motion of the narrative – comes off as facile and overwrought.

Strube has plenty of talent and a quick wit, but is working with a tired formula. There is a good novel in here, but too often the authorial voice overwhelms those of the characters. It may be time for Strube to move beyond the Strubian novel.