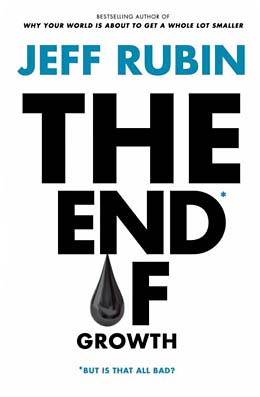 THE END OF GROWTH
by Jeff Rubin

In 1967, when Leonard Cohen sang that the mysterious Suzanne “feeds you tea and oranges that come all the way from China,” the distance those delicacies had travelled magnified their exoticism. You’re unlikely to find today’s poets rhapsodizing about the Chinese garlic in their salad dressing. We’ve long since grown accustomed to the notion that cheap labour and low fuel prices make shipping everything from apples to barbecues to dollar-store trinkets halfway across the globe more cost-effective than producing them locally.

If economist Jeff Rubin is right, however, those days are quickly coming to an end. Where economics is concerned, distance is measured in money, not miles. Until now, cheap energy – meaning cheap oil – has underwritten every aspect of globalization. The issue is not that we’re running out of oil, but that the affordable, easy-to-get stuff  is long gone. Pundits continue to play up new sources of oil; the problem is that tapping them – whether through the controversial practice of hydraulic “fracking” or squeezing it out from Alberta’s tar sands – is energy intensive, which drives up the price. Companies will go to the ends of the earth, literally, to get oil, but only if they stand to make a profit.

The 2008 recession demonstrated just how swiftly and radically high oil prices can affect the world economy. Massive government stimulus packages were intended to jump-start the return to growth everyone assumed was right around the corner. But with triple-digit oil prices here to stay, Rubin believes the most recent recession was merely a dress rehearsal for the zero-growth era at our doorstep, the implications of which – higher costs for everything, including transportation, utilities, consumer goods, and food – will be permanent and profound.

But there’s an upside. High transportation costs will mean the resurgence of domestic manufacturing and locally grown food. Reduced shipping due to prohibitive fuel costs translates to cleaner air and a decrease in global warming. Expensive consumer goods equal lower levels of consumption and waste.

Rubin’s argument is just as urgent and persuasive as when he made it in his 2009 bestseller, Why Your World Is About to Get a Whole Lot Smaller. And that’s the thing about The End of Growth: its message is not substantively different from that of its predecessor. The laws of supply and demand knowing no boundaries, however, Rubin and his publishers have determined it’s a message that bears repeating.

The End of Growth mostly mines recent headlines for further proof of Rubin’s original argument. There are chapters on the effect of the Arab Spring on Middle East oil supplies, on the Keystone and Northern Gateway pipeline controversies, and on the financial crisis in the eurozone. Rubin has a gift for showing the big picture, including the not-so-subtle ways political and business interests play off each other. And his writing is never dry.

The emphasis on zero growth also distinguishes this book from its predecessor. When it comes to what a zero-growth economy will look like, Rubin doesn’t pretend to have all the answers, but he informs us that such a world is on the horizon regardless of whether we’re ready for it. There’s more than a whiff of determinism in Rubin’s contention that the march toward a permanent slowdown is so inexorable that environmental groups, governments, and corporations are powerless to influence it. He concedes that alternatives such as wind and solar power will play a role in servicing our future energy needs, but using and consuming less of everything will play an even bigger one. Price, history has shown, is a far more powerful incentive for change than legislation, tariffs, or carbon credits.

The bitterness Rubin expressed in Your World at having his supposedly far-fetched ideas laughed at is replaced here by the slightly smug affect of the vindicated. But if Rubin revels somewhat in the Cassandra role, neither of his books could be called a jeremiad. That’s because Rubin, unlike others in his profession, actually welcomes the lean times to come. It’s refreshingly disconcerting to see an economist refer to the earth goddess Gaia in the same paragraph that discusses the ineffectiveness of cap-and-trade schemes.

Many of the concepts Rubin builds on, like peak oil, are in fact old news. What’s different is that he sees them in positive terms: slow growth or no growth is good for the planet. The short-term pain to come will result in humanity’s long-term gain. Rubin is essentially an environmentalist in an economist’s clothing.

In the not-too-distant future, tea and oranges from China may once again come to seem like precious commodities. More than 30 years after “Suzanne,” Leonard Cohen may have been imaging just such a world in his song “Land of Plenty”: