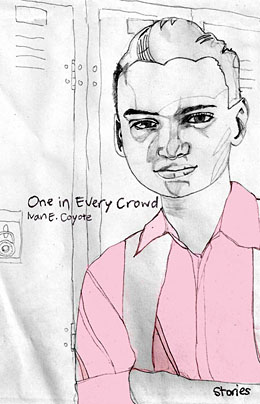 ONE IN EVERY CROWD
by Ivan E. Coyote

Despite being a fortysomething, confident, self-identified butch lesbian with a crew cut, tattoos, and killer biceps, Ivan E. Coyote’s heart still races when she enters high schools, where she gives talks far more often than she would like. Most performers try to connect with the broadest possible audience. Coyote’s hope is to reach just one or two kids – those whose lives may be changed forever because they met someone like her; like themselves.

The semi-fictional memoirs in this collection, many of which are only two or three pages long, are stunning in every way: unaffected, compassionate, inspirational, and, as if that wasn’t enough, achingly funny. Coyote has a particular gift with endings. This is a writer who knows how to sew up an anecdote with a precision-engineered mix of mirth and gravitas.

The book is thoughtfully broken up into thematic sections. There is Coyote’s rough-and-tumble Yukon childhood; portraits of her coarse but loving family, including her Uncle Rob who “never let the fact that I was declared female at birth get in the way of our male bonding”; encounters with bullies, and with kids who have inspired her. For instance, when a boy at an Edmonton camp for gay youth modelled a gold lamé gown and heels in a fashion show, Coyote, who was the camp’s artist-in-residence, says she felt “like the homosexual version of a hockey dad whose son has just scored in overtime.”

A section called “That Boy” is given over to tales about a friend’s son, Francis, whose early penchant for cross-dressing made Coyote deeply protective of him – a feeling she extends to the younger generation as a whole. Almost more moving than Coyote’s support of Francis’s drag queen tendencies is her willingness to back off when, at the age of 11, he adopts the scornful, tough-guy persona of his peers.