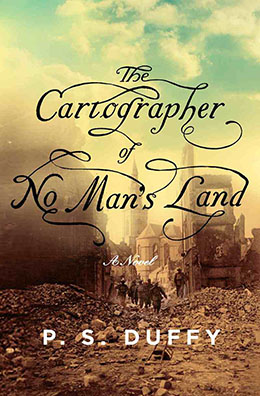 THE CARTOGRAPHER OF NO MAN’S LAND
by P. S. DUFFY

Though a number of women have written novels about the First World War, including Rebecca West, Virginia Woolf, Dorothy Sayers and, more recently, Pat Barker in both her Regeneration trilogy and a pair of later novels, Life Class and Toby’s Room (its title a nod to Woolf’s Jacob’s Room), most have focused on the hurdles faced by shellshocked soldiers returning home. P. S. Duffy’s ambitious first novel, which divides its time between the Western Front circa 1917 and the fictional hamlet of Snag Harbour, Nova Scotia, distinguishes itself by venturing, literally, into the trenches and staging some of its most powerful moments there.

The Cartographer of No Man’s Land begins with a prologue depicting an idyll of prelapsarian innocence. A father and son—they could be either of the novel’s two pairs, Angus McGrath and his father Duncan, or Angus and his own son, Simon Peter—sit contentedly in a rowboat singing songs and laughing. The light is golden, the sea is silver and generational unity seems extended to time itself: “past, present and future—gathered and expanded and released.”

The scene, clearly, is a foil for the horrors of trench warfare soon to come. Shortly after Duffy’s 34-year-old protagonist Angus arrives in France, he visualizes his family back home in a similar light, though this time the phrasing suggests a more self-conscious mythologizing: “Idealized images, every one. Angus knew it. He dealt in such images, after all.”

Comments: Comments Off on THE CARTOGRAPHER OF NO MAN’S LAND
by P. S. DUFFY Posted by: admin Categories: Adult Fiction, Reviews Tags: Fiction, historical fiction, National Post
← BOOKS FOR THE HOLIDAYS: FIFTEEN OF THE MOST INTRIGUING OF 2013
RED SKY IN MORNING
by Paul Lynch →