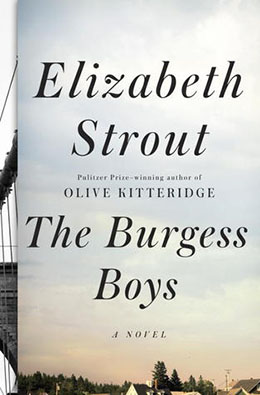 THE BURGESS BOYS
by Elizabeth Strout

Elizabeth Strout’s writing has an old-fashioned quality, an unhurried decorousness, that can make it easy to forget her stories are set in contemporary times. Though about half her latest novel takes place in Brooklyn (it’s the first of Strout’s four novels not to be set solely in Maine), its characters bask more often in the light that comes from their windows than from their laptops (technology is present, but never central).

Mindful of landscape and atmosphere, Strout begins most chapters by checking in on both. The bucolic leisureliness of her descriptions, however, contrasts with the turmoil of Strout’s characters’ lives. Here, once again, she shows a penchant for difficult, unlikeable, people—something her Pulitzer Prize-winning novel Olive Kitteridge was widely praised for.

The eldest of three siblings from Maine now in his mid-fifties, Jim Burgess is a celebrity attorney who made his name in an OJ-like trial that earned him kudos at the expense of real justice. Over a decade later, he still gets admiring gazes en route to his flashy Manhattan firm. He shares a large house in Park Slope with his wife Helen, an outwardly pleasant but inwardly priggish mother of three college-age children whose chief preoccupation is the keeping of her family’s enviable status quo.

The other Burgess boy, Jim’s brother Bob, is likeable and kind. He’s also a divorced, childless, borderline alcoholic with a tendency to go “away in his head.” Bob’s life plays like a B-roll to Jim’s. He works at law, but less glamorously, writing endless briefs as a legal aid attorney. He lives in Brooklyn, but in a scruffier part. Jim never tires of deriding Bob for his failures and Bob, for his part, patiently tolerates Jim’s name-calling and low-level bullying.

Bob’s role as the family’s whipping boy was established at age four, when he caused a car accident that killed their father. Bob’s twin sister Susan, a bitter, divorced single mother—the only one of the three siblings never to leave their hometown of Shirley Falls (also the setting of Strout’s first novel, Amy and Isabelle)—treats him almost as contemptuously as Jim does.

When disaster strikes, as it suddenly has, Susan naturally calls Jim first. For reasons that are still unclear, her introverted teenaged son Zach has tossed a frozen pig’s head into a local Somali mosque during Ramadan and may be charged with a hate crime. Shirley Falls’ growing Somali population has been rubbing uneasily up against its white establishment, and the potential political fallout of the case threatens to be huge.

Much to Helen’s chagrin, Jim is about to sacrifice their vacation to go to help Susan when Bob volunteers to go instead. As expected, he makes a hash of it; by the time he leaves Zach is worse off and Susan is furious at Bob. Jim now has several messes to clean up.

Used to saving the day, Jim is stunned when his efforts actually turn out have had the opposite effect. And when Jim reveals something to Bob about their past that calls into question everything Bob has believed about himself, its Jim who suddenly starts to unravel.

Strout writes at a high level. As a family drama, this one has its satisfactions: comeuppances are gotten; imbalances are balanced. It can be a motivating read. Yet Strout tips her hand a little too much; combined with his supposed perfection, Jim’s cruelty has a sadistic edge that alerts us, early on, to the inevitability of a fall. Zach never entirely convinces, and Strout’s attempt to bring us the inner life of one of the novel’s Somali characters mostly falls flat. The light in Maine is lovely, but it’s not always distracting enough.