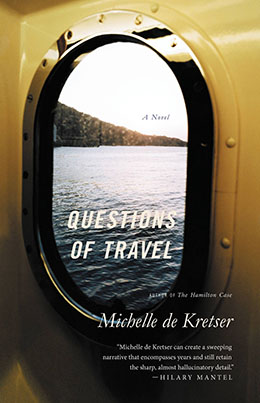 It’s hard not to read Michelle de Kretser’s fourth novel with a tinge of regret knowing that, statistically speaking, new fiction is bound to disappoint for a while. De Kretser’s book is that gleaming thing that makes everything around it seem dull or meretricious in comparison. It’s one of the most beautifully written books I’ve ever read.

A great deal happens in the novel, though not in a plot-like way. Chapters alternate between the stories of Laura and Ravi, two strangers roughly the same age but from different parts of the world. In Australia, Laura embarks on a world tour with an inheritance from her spinsterish aunt—art school having furnished neither fulfillment nor accolades. When the money dries up, her peripateticism is limited to housesitting in London, where she finds a best friend in a gay alcoholic bon vivant named Theo. Lacking looks and charisma, Laura appears to accept that intimacy will always, for her, be fleeting, unorthodox. Years later, when homesickness arrives unexpectedly, like the grim reaper, Laura moves back home, where she rides out the rest of her prime working for a hip travel guide publisher.

In a coastal town in Sri Lanka, Ravi grows up geography-obsessed, but his widowed, Catholic mother insists on science. In the ‘90s he settles on IT, gets married, has a child. Tamil violence adds urgency to his wife’s involvement with a local NGO, but when she and their son are murdered in an unspeakably appalling way, it’s still entirely unexpected. Despite knowing little about her work, Ravi is now a target too, so the NGO arranges safe passage to Australia for him. While awaiting the outcome of his refugee hearing, Ravi works at a nursing home before ending up at the travel guide publisher.

Global interconnectedness! you say, but Laura and Ravi’s travels seem to wield the reverse: loneliness, alienation, tedium. “Travel,” the novel’s thematic glue, is outed as a kind of fraud. The travel guide publisher profits from the truth: people want to make the correct series of choices then come home with the photos and spoils to prove it; they’ll go off the beaten path if you hand them a map first.

De Kretser’s writing is beautiful, though never merely pretty: “Far below, the Atlantic approached, slow as a slattern, to smear its gray rags along the shore.” She moves things forward in unshowy semi-tones, often through appositives: “One man had a coil of smoke at his feet, a gray cat from whom he was never parted,” but also through a persistent, silent thwarting of expectations. A change of mental state is indicated with a subtle narrative shift: after the murders, Ravi observes things but doesn’t wonder about them.

Part of De Kretser’s talent is her ability to decontextualize language in a way that seems to tug at the quiddity of things. Her command of the material is such that she can do the outrageous—use exclamation marks or mention farts, say—without causing a ripple in mood or momentum. Its amplitude varies but the novel’s gorgeous wavelengths, its energy, stay constant.