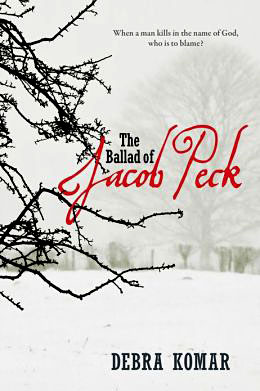 THE BALLAD OF JACOB PECK
by Debra Komar

Long before New Brunswick was a twinkle in Confederation’s eye, and almost two centuries before Shediac became home to the largest lobster sculpture in the world, the county’s nascent English/Acadian settlement was the site of a macabre murder. In January 1805, an ersatz preacher named Jacob Peck arrived in town. Before he left six weeks later, he’d used his Svengali-like powers to persuade a local farmer named Amos Babcock to murder his own sister in cold blood.

Given the lyrical title of Debra Komar’s book (borrowed from a 1992 song by the late John Bottomley), its rich, feisty prose, and given also that she has chosen the theatrical conceit of dividing it into seven “Acts,” her declaration that: “This is a work of non-fiction. The characters are real, and all events are faithfully reconstructed from credible sources in the historical record,” comes as something of a surprise. The Ballad of Jacob Peck clearly isn’t a typical work of history. But nor is it historical fiction, a far more forgiving genre for authors whose research might be gappy, or who feel that life tends not to be as compelling as art.

Sticking strictly to the facts and forgoing cheap fillers to bulk up her narrative, Komar has produced a grippingly good account of this notorious chapter in maritime history, one chockablock with intriguing side characters who—with names like Dorcas Babcock, Hezekiah King and Mercy Hall—wouldn’t be out of place in a Dickens novel (had he been born to write one).

Read the full review at the National Post’s Website:
http://arts.nationalpost.com/…the-ballad-of-jacob-peck/

Comments: Comments Off on THE BALLAD OF JACOB PECK
by Debra Komar Posted by: admin Categories: Adult Non-fiction, Reviews Tags: National Post, Reviews
← OUR MAN IN IRAQ
by Robert Perišic
THE JUGGLER’S CHILDREN:
A Journey into Family, Legend and the Genes That Bind Us
by Carolyn Abraham →