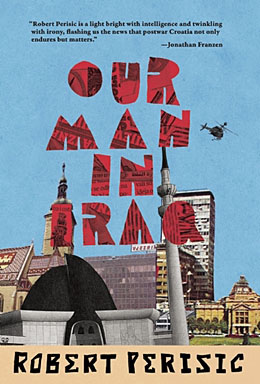 OUR MAN IN IRAQ
by Robert Perišic

When I say Our Man in Iraq is likely to be the best novel you’ve ever read by a Croatian writer, I’m not just cynically gambling that you’ve never read any Croatian novels; or rather, I’m doing it secure in the knowledge that Robert Perišić’s first novel (originally published in 2007) is also terrifically witty and original.

Perišić’s nod to Our Man in Havana—Graham Greene’s 1958 novel about a vacuum cleaner salesman sent to Cuba as a spy by British intelligence—isn’t there in the book’s original Croatian title, which translates literally into “Our Man on the Ground.” Regardless of whether it was an afterthought, the reference works nicely given that both novels feature gormless, inexperienced characters sent to report on foreign countries they know nothing about; men whose predictable failures later cause their recruiters significant personal anxiety.

In Our Man in Iraq, the recruiter and protagonist is Toni, a disenchanted journalist and ex-soldier who works for a Zagreb paper. Now, ten years after Croatia’s War of Independence a new, American-led war in the Middle East is grabbing headlines. In a move calculated to please both his mother, who, back in their small village, boasts of his being Mr. Big in Zagreb, and his boss, who’s always looking for cheap ways to get an edge over the competition, Toni arranges for his cousin Boris to be the paper’s correspondent in Baghdad.

But Boris, whose only skill is knowing Arabic, soon goes rogue, sending meandering, stream-of-consciousness dispatches long on philosophy and short on facts that Toni must cobble into coherent reports.

When Boris suddenly stops communicating, Toni initially tries to hide it from his boss, who’s unaware of the family connection, and from Milka, Boris’ overwrought mother. Furious that Toni isn’t taking her calls, Milka complains to a rival media outlet, who are only too happy to break the news of their competitors’ blundering amateurishness. Perišić uses his martini-dry wit to full effect in the ensuing debacle, which includes Toni’s attempt to keep things together with his sex bomb girlfriend, Sanja, whose acting career takes off just as his begins its irrevocable plummet.

What Perišić’s characters do often seems like a metonymy of national affect. Toni’s graduation from blinkered provincial to urbane sophisticate thus is echoed in Croatia’s uneasy transition from socialism to capitalism. In a scene where he listens to Sanja and her mother argue over whether to remove a wall in their house, Toni thinks: “Our people are like that: they’d always prefer to build a wall than knock one down.” And when Boris goes missing, Toni equates the inappropriate rush of excitement in the newsroom (could Boris be the first Croatian victim in Iraq?) with the days after 9/11: “If none of our people had been in the Twin Towers we would’ve been disappointed. We so much wanted to be part of world news.”

The free market economy has meant access to good drugs, wine and food, yet there’s a prevailing, gloomy sense among Toni’s cohort that they’ve somehow arrived at the party too late: “…shopping malls shot up like mushrooms after the rain and Croatia entered the WTO and similar organizations just when Naomi Klein published No Logo with an aim to spoiling our fun.”

Though I was slightly bewildered by translator Will Firth’s decision to write rural Croatian dialect as Scottish brogue, a Croatian friend of mine (okay, my only Croatian friend) thought this was apt. Both groups, she argues, take their consonants unusually seriously, except when they fall at the end of words. The upshot of this is that, in addition to being a delightfully acerbic primer on a literarily underrepresented part of Europe, Our Man in Iraq may well prove to be one of those rare cases where something is actually gained in translation.

Comments: Comments Off on OUR MAN IN IRAQ
by Robert Perišic Posted by: admin Categories: Adult Fiction, Reviews Tags: Reviews, Toronto Star
← THE SPARK:
A Mother’s Story of Nurturing Genius
by Kristine Barnett
THE BALLAD OF JACOB PECK
by Debra Komar →