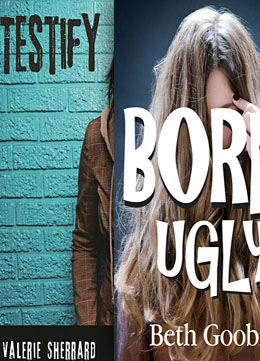 Two new YA novels by veteran authors share an unusual theme: both feature 16-year-old female protagonists who become unwitting (and, in one case, unwilling) accessories to serious crimes. 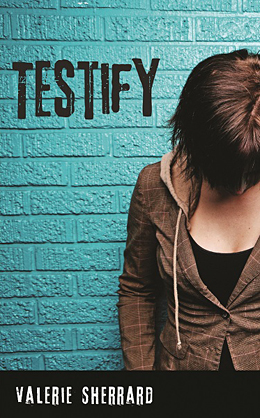 In Valerie Sherrard’s electrifying Testify, Shana Tremain gives eyewitness testimony in court corroborating her friend Carrie’s charge that her stepfather has been molesting her. The problem is, Shana’s testimony is a lie.

Shana knows what she did was wrong, but when Carrie came to her in tears, telling her about the monster behind her stepfather’s nice-guy facade, who was she to question whether her best friend was being honest? She would do anything for Carrie, even if it means breaking the law.

Shana’s motives seem above reproof, but something about Carrie makes readers uneasy. For one thing, there’s the fact that Carrie earns more money at the babysitting job they share (which Shana brushes off because Carrie landed the gig). Carrie, Shana gushes, is someone who makes everything fun: “And if there’s nothing going on, she dreams something up.”

When the not-so-minor business of some stolen jewellery arises, Carrie immediately pins the blame on their mutual friend Hayley, who has cooled to Carrie since the court case. A lot of little things soon add up to one big thing, however, and Shana realizes that Carrie has used her to put an innocent man in prison. What’s worse, Carrie’s smart enough to stay two steps ahead of Shana when she tries to undo the damage.

In Carrie, Sherrard skilfully evokes a familiar type: the manipulative leader who builds a grateful following she can divide and conquer whenever her power seems threatened. By the time the inevitable showdown between Carrie and Shana takes place, Carrie has become nothing short of the personification of pure evil.

Does Sherrard’s novel stretch our suspension of disbelief? Sure. Does it offer wonderfully satisfying escapism? You betcha. Sherrard gets so much right in the novel’s tone and in the girls’ chemistry that it’s impossible not to buy into her thoroughly modern take on teenage vigilante justice. 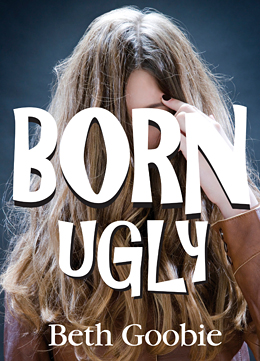 There’s a decidedly different pace and feel to Beth Goobie’s Born Ugly. The novel’s heroine, Shirley “Shir” Rutz, turns heads, but for all the wrong reasons: “Hers was the kind of face that fairy tales reserved for dwarfs and goblins, a face without a single redeeming feature.” Shirley is dead ugly, and she knows it. At school, the teasing and bullying are vicious and relentless. When someone sets up a website to decide who’s the ugliest kid at school, Shir wins by a landslide. In another disturbing scene, a student smears dog shit all over Shir’s face.

Home doesn’t offer much of a reprieve either. Shir’s mother, unable to handle her daughter’s resemblance to the deadbeat, alcoholic father who left when Shir was five, treats her with contempt, constantly threatening to throw her out.

When she’s not numbing her pain with a few beers at her private sanctuary on a nearby bridge, Shir makes deliveries for the local grocer, Mr. Anderson. A series of events leads Shir to suspect she’s delivering more than just groceries, but by the time her instincts are proven correct, she’s already in deep with the local drug racket.

Goobie’s novel ends with a dramatic confrontation, although a far less convincing one than that of Testify. After spending 200 pages weaving a complex plot with disturbing emotional implications, Goobie seems in a hurry to wrap things up with simplistic solutions, not the least of which involves Finlay, a guardian-angel-type who effortlessly raises Shir’s self-esteem with just a few clichéd phrases. But the book’s biggest problem is Shir herself, who is ultimately too flat a character to elicit the empathy upon which a novel like this hangs.

It’s hard not to contrast the economy of these two authors: Sherrard creates more tension, more excitement, and better characters in fewer than half the pages used by Goobie. In addition, she’s a writer who trusts her readership enough not to feel the need to fall back on familiar, feel-good morals.