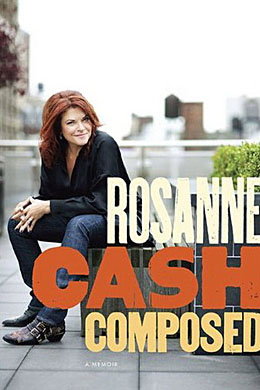 For my entire life I have been trying to give voice to the rhythms and words that underscore, propel, and inform me. Because my peripheral vision is 200 times more acute than my direct powers of observation, and my love of an A-minor chord is more charged and refined than my understanding of my own psyche, I have often attempted to explain my experiences to myself through songs: by writing them, singing them, listening to them, deconstructing them, and letting them fill me like food and water.

So writes musician Rosanne Cash in the introduction to her beautifully written memoir Composed.  Her mention of peripheral vision rings true: Cash writes instinctively and associatively with an unpretentious tone that mirrors the thoughtful poignancy of her songwriting.

With 14 albums, two books and a number of essays and fiction under her belt, Johnny Cash’s daughter is famous and accomplished in her own right. Celebrity parents are notorious for their long shadows, and for years Cash avoided her father’s by simply withdrawing. Today, however, she is clearly comfortable basking in its cool shade. “I had done an exhausting dance with his legacy for my entire life” she writes, noting that it was not until 2009’s The List—her album of covers based on a list of 100 essential songs her dad once gave her—that she finally felt at ease with her place in that legacy.

Born in 1955, Cash was the first child of her father’s marriage to Vivian Liberto, a devout Italian American catholic who had to put up with her husband’s notorious drug use and philandering. After the two divorced and remarried when Cash was 12, she remained in California with her mother, stepfather and two sisters, while Johnny went to Tennessee with new wife June Carter.

After high school, Cash went on the road for two-and-a-half years with her father. Determined to find her own way, at the age of 20 she went to work at CBS Records in London for six months until being abruptly summoned back—her father justifiably afraid she would never return home.

Cash took English and drama at Vanderbilt University for a year, then studied acting with Lee Strasberg in L.A. where she “took to Method acting classes like a duck to water.” Describing her anxiety at having to cry in performance for the first time, Cash says she was astonished to find her training had worked and that she could cry right on cue. The problem was stopping: Cash wept uncontrollably for the rest of the 20-minute scene.

When she succumbed to the inevitable and turned professionally to music, Cash wanted to focus exclusively on songwriting, performing being contrary to her “native reticence.” There was also the problem of her voice, which she calls “undependable, beyond my control, somewhat embarrassing at times.” Yet Cash did perform, climbing quickly and easily up the country music charts where she garnered 11 number one hits. At 25, she married country star Rodney Crowell (with whom she had three girls), a high-profile union that kept her continuously in the spotlight until their divorce 13 years later.

Like her father, however, Cash was by nature an independent-minded outsider. After moving to New York in the early 90s post-divorce, her career veered toward a more poetic singer-songwriter sensibility.

Although fiercely self-critical, Cash takes pleasure in discussing her various recordings, collaborations, and the craftsman-like process intrinsic to the old analog recordings.

Cash can be witty, opinionated and introspective depending on the topic. Some examples:

On New Country: “Modern country music speaks less of desperate loss, and has become shiny and rich and rather shallow as a result.”

On religion: “I realized I enjoyed the rituals of religion far more than the substance.”

On the biopic Walk the Line: “an egregious oversimplification of our parent’s pain, writ large and Hollywood-style.”

The aughts were a difficult decade for Cash. Her stepmother, father and mother all died within a two-year span (2006’s Black Cadillac was part of her reaction to the losses). And in 2007 she endured surgery for a rare brain condition. Her saving grace was her second, happy marriage to producer John Leventhal, which produced a son.  (Johnny’s reaction to their engagement: “Thank God. I’ve been waiting forty years for one of my daughters to marry a Jew.”)

Cash’s anecdotes and reminiscences are her grist, but they are only half the reason to read this memoir; like all great books, the real pleasure is in Cash’s elegiac telling of them. This is an ongoing coming-of-age story by an artist who has much to share and about art, fearlessness and the deep pull of family and tradition.