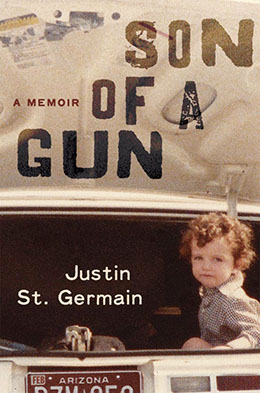 SON OF A GUN
by Justin St. Germain

“My mother always had shitty taste in men,” Justin St. Germain understatedly asserts near the start of this astonishing memoir. St. Germain was a 20-year-old college student living with his brother in Tucson when he learned, just days after 9/11, that his mother had been shot to death by his stepfather Ray in their trailer in the Arizona desert. Three months later, Ray was found dead in his truck, a blood bespattered suicide note by his side.

For St. Germain, who was born in Philadelphia but grew up as self-described white trash around the tourist mecca of Tombstone, the news had the grim air of inevitability. After his father left when he was two, his mother’s life became a revolving door of men, many of them abusive. Ray, the gun-toting former deputy who was her fifth husband, was one of the few stepfathers St. Germain actually liked.

Despite living an outwardly respectable life as a writer in San Francisco almost a decade after the murder, St. Germain still sleeps with a loaded shotgun under his bed. Determined to confront the denial that makes him feel like he’s living a lie, he travels back to Arizona where he visits old haunts and interviews the detective who worked on his mother’s case. He also meets with some of her exes. One is Max, “an alpha-male blowhard, full of threats and bluster and lies”; another is Brian, who uses the occasion to try and convince St. Germain to buy into a dubious investment scheme. While reviewing home videos, St. Germain stumbles upon footage of the Christmas his brother gave his mother the handgun that would eventually be used to kill her.

There’s no dearth of memoirs about family tragedies but few have Son of a Gun’s stand-alone literary merit (James Ellroy, whose writing was fuelled by his mother’s unsolved murder, also comes to mind). Indeed, the power of stories serves as both the memoir’s theme and raison d’être. Tombstone, St. Germain notes, would be a long-forgotten mining town were it not for its self-concious mythologizing about local legend Wyatt Earp. But he also draws a convincingly direct line between his mother’s death and the gunslinger whose “legacy leads straight to Ray, right down to the mustache and the badge and the belief that a man solves problems with violence.” St. Germain’s decision to write the book was prompted, in part, by his realization that he knew more about Earp than about his mother.

St. Germain’s style—laconic, masculine, pent-up—recalls Cormac McCarthy and Tobias Wolff, whom he studied under at Stanford University. And though he was furious when a local news show referred to his mother’s murder as an “Old West Murder Mystery,” Son of a Gun also bears the narrative imprint of the Westerns he devoured as a kid. When St. Germain describes asking Ray to take care of his mother when he left for university “it was like we were two cowboys selling a horse.” Yet it’s an ethos that repels him, too; particularly the misogynistic frontier logic that had the local sheriff suggesting his mother died because “she made the wrong choices.”

Between Son of a Gun’s beginning and end, our sense of St. Germain’s mother is almost miraculously transformed from someone dependent and neglectful to someone tough, brave and loving. As well as being a former paratrooper, Debbie St. Germain was a horse-loving entrepreneur who ran five different businesses; who gave her boys guns, but also books and money for college. Though in the end St. Germain’s investigations fail to bring him quietude, it’s profoundly moving to witness his childhood resentment give way to love, admiration and—perhaps most of all—to empathy.