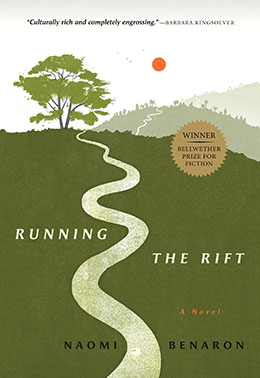 RUNNING THE RIFT
by Naomi Benaron

Naomi Benaron’s debut novel recently won the Bellwether Prize for Fiction, which, depending on your point of view, may or may not be something to recommend it. The Bellwether was established in 2000 by author Barbara Kingsolver with the aim of recognizing a work of socially responsible fiction by a U.S. author—a laudable but potentially fraught mission given that, more often than not, social responsibility and great fiction make rather poor bedfellows.

In the case of Running the Rift, however, the results are a pleasant surprise. Set in Rwanda in the decade leading up to the 1994 genocide, the novel’s hero is Jean Patrick Nkuba, a young man from a modest rural background whose talent for running earns him a scholarship at the local university and a crack at being the first to represent Rwanda in the Olympics. Yet Jean Patrick’s physical advantages are offset by one irrevocable fact: he is a Tutsi in a society dominated by an increasingly hostile Hutu majority.

Many Canadians first became aware of the atrocities in Rwanda through the efforts of our own General Romeo Dallaire, who chronicled his ultimately futile attempt to persuade the UN to prevent the impending genocide in his chilling book Shake Hands with the Devil. Here, the failure is represented by the sight of somber-faced UN soldiers fleeing the country as it descends into chaos; for Tutsis, it’s the final confirmation that their fate is now sealed.

But Running the Rift is also a painstaking, loving portrait of Rwanda before it became synonymous with the unspeakable horror that saw nearly 800,000 lives barbarically snuffed out in less than 100 days. The country we discover is one of breathtaking, rolling hills redolent with sweet smelling flowers and deep lakes; of women in brightly coloured dress tilling the dusty red fields for sorghum, cassava and maize. A country of farmers and fishermen where family and religious ties run deep and neighbours look out for one another, regardless of cultural background. Benaron revels in the taste and smell of sticky stews and yeasty banana beer, and peppers her pages liberally with Kinyarwanda, the language shared by Tutsis and Hutu. It would be easy imagine this simply as first-class travel writing were our ultimate destination not such a hellish place.

A runner herself, Benaron takes obvious pleasure in detailing Jean Patrick’s training regime. But her larger theme, the collision between sport and politics, is one for the ages. As we’re reminded every four years, the Olympics is about medals, but it’s also about boycotts, defections and unapologetic displays of cultural superiority.

Jean Patrick’s situation is inherently political given the fact that his coach is a Hutu rumoured to have had a hand in training members of the interahamwe militia. Jean Patrick trusts Coach, but both men dance around each other, aware that theirs is a relationship of mutual dependence, not choice. Even as the government ominously compiles lists of Tutsi children and spews out increasingly incendiary hate propaganda over the radio waves, Jean Patrick tries to rise above the fray, seemingly unaware that his very talent has made him a political pawn. While his brother Roger goes off to fight with the Tutsi-led rebel RPF and his Tutsi-sympathizing Hutu girlfriend Bea joins protests in the capital, Jean Patrick accepts a Hutu identity card to ease his passage through the country’s endless checkpoints. In the end, however, he is told he must compete as a Tutsi—a politically engineered move aimed at promoting the spurious notion of Rwandan unity abroad before the genocide.

When the killing begins in earnest and Jean Patrick is forced abandon his country, his family and his aspirations, Benaron spares us the worst of the details but not its dreadful aftermath. In this she sometimes stumbles—the inevitable sports metaphors can be a bit hackneyed; Jean Patrick and Bea’s love story a touch too redemptive—but overall there’s more that works than doesn’t in this rich, moving, and deeply sobering tale.