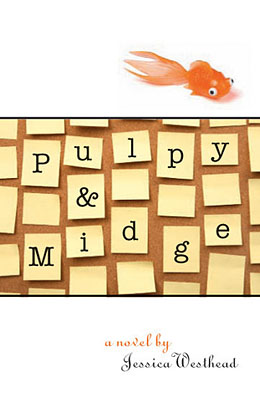 PULPY AND MIDGE
by Jessica Westhead

Pulpy Lembeck, whose moniker is the result of a long-standing college joke related to his prodigious orange juice consumption, is the unassertive protagonist of Jessica Westhead’s comedic debut novel, Pulpy and Midge. Pulpy lives in an apartment with his wife Midge, a candle-party hostess, where they enjoy the intimate habits of a couple with no children. The highlight of their week is their attendance at “Couples Ice Dance Expression,” while a fun evening at home consists of playing pre-recorded music on their electronic keyboard to the flicker of a fireplace video.

Pulpy works in an office whose purpose is unknown (or at least inconsequential) to the reader. He has a new boss, Dan, whose abrasive, less-than-simpatico style is a far cry from his lenient predecessor, the animal figurine-collecting Al, who has just retired after promising Pulpy a promotion.

Dan is on a mission to “overhaul” the office—a process that involves the creation of “vision statements” and appropriating coffee mugs from the already embittered receptionist. Much to his dismay, Pulpy has been singled out by Dan as an ally in this crusade, a role that entails endless nights out with him and his oversexed wife, Beatrice, with no mention of work.

Despite their mutual distrust of Dan and Beatrice, Pulpy and Midge soon find themselves spending virtually every night with them: waking up with crashing hangovers on each other’s couches and raiding each other’s closets for ill-fitting clothes to wear to the office. The docile Pulpy, still hoping for that elusive promotion, is subjected to wearing a pager, which serves no purpose other than for Dan to more easily arrange more boozy get-togethers. Pulpy, meanwhile, gets the reputation of office toady with his fellow employees, thus further alienating him from their ranks.

By writing an office comedy at a time when the benchmark for the genre has so recently been set by the brilliant scriptwriters of the British and American TV series, The Office, Westhead has set herself a daunting task. Naturally, any new foray into the territory invites comparison, in this case a rather unfavourable one for Westhead, who simply does not have the depth or the material to flesh out the joke. As a result, she tries to wring laughs out of the constant repetition of a single scenario: Pulpy and Midge in the continuous, drunken thrall of Dan and Beatrice, who appear to have no real motive other than to control (often with rather sinister overtones) their every personal waking hour—like an office version of Fatal Attraction.

Arguably, Pulpy and Midge’s strength is its dialogue, of which there is a great deal. In fact, there is not much of anything else—descriptions of place or character being virtually non-existent. Pulpy and Midge are clearly meant to be endearing, but their utter helplessness and inertia makes them seem merely pathetic. Dan and Beatrice, on the other hand, are too nastily sociopathic to be amusing.

Ultimately, Westhead puts all her comedic glaze on a single doughnut, which is to riff off the inherently assumed funniness of ironic office kitsch: the joke mugs, the desk calendars, the motivational posters, the drones with no lives who call ugly things “nice.” As the thousands of people who work in offices probably already know, the experience can be alienating, unproductive and sterile. These, one would hope, are not the intended readers of Pulpy and Midge. After all, do they really need reminding of how hollow and depressing their lives apparently are.