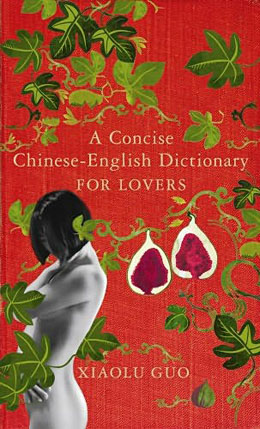 A CONCISE CHINESE-ENGLISH DICTIONARY FOR LOVERS
by Xiaolu Guo

As ubiquitous as tales of China’s ascendancy these days are the tiresome metaphors of suns rising, or tigers at various stages of roaring, leaping or pouncing. Missing usually is any sense of the lives of individuals, of the personalities behind the endless assembly lines and lead paint scandals.

By way of antidote, Xiaolu Guo’s astonishing first novel in English is about as personal as it gets. The precocious, 34-year-old Guo is something of a powerhouse herself. An award-winning documentary filmmaker and author of several other books in Chinese, A Concise Chinese-English Dictionary for Lovers was short-listed for Britain’s Orange Prize for Fiction this year.

Guo’s protagonist, Zhuang, is the daughter of rural shoe factory owners who has come to London on a one-year visa to learn English. She tells people to call her “Z” because her Chinese name is too difficult to pronounce. This, despite the fact that her own English is painful at best. Crippled by cultural and language barriers, not to mention her own naiveté, Z’s pocket dictionary becomes a crutch in a place where everything, not just the English breakfast replete with “very salty bacons” and “messy scrumpled eggs,” is alien.

Chapters are written as dictionary entries, a conceit that might have come off as contrived in other hands, but works perfectly here. It soon becomes apparent to Z that learning the definition of a word is very different from understanding its meaning. British protocol and politeness constantly confound her. After being berated by a taxi driver for not closing the door “properly,” Z checks the word up, only to find it has no equivalent in Chinese. The reason: “In China, we never think of ‘correct behaviour’ because every behaviour correct.”

There is a wry nod to Western frustration with the sometimes dubious quality of mass-produced Chinese goods when Z’s anxiety-ridden arrival in London is exacerbated by the delicious irony of the wheels falling off her made-in-China luggage:

Coat hangers, plastic washbasins, clothes, leather belts and nearly-leather bags, computer components, etc. we make there. Every family in my town is factory. Big factories export their products to everywhere in the world, just like my parents get order from Japan, Singapore, and Israel. But anyway, one over-the-sea trip and I lost all the wheels. I swear I never buy any products made from home town again.

“Misunderstanding” is one of the early entries in Zhuang’s dictionary and the basis for much of what befalls her. When she meets a man in a movie theatre and asks to see where he lives, she misconstrues his invitation to “be my guest” as an offer to live with him, which she promptly does. Despite a 20-year age gap, the man (who remains nameless) soon becomes her first lover. Through him, her understanding of both language and love deepens, her desire to express her passion resulting in awkward yet charming syntax:

I never met mans like you before. I think we perfect: You quite Yin, and I very Yang. You earthy, and I metal. You bit damp, and I a little dry. You cool, and I hot. You windy, and I firey. We join. There is mutualism. And we can benefit each other. And all these makes us efficient lover.

Z’s lover is gradually revealed as a disenchanted sculptor, vegetarian and erstwhile deliveryman who has chosen to opt out of the materialism of the West, making them both outsiders of a kind. He reveals that he has lived most of his life as a gay man, and that she is his first female lover. As she is unfamiliar with the term “homosexual,” Z comes to it with no moral prejudices.  But the lover also champions a fierce individualism that Z finds hard to reconcile to her Maoist upbringing. In Chinese, she tells us, there are no tenses, so a concept such as “love” is for all time.

Z makes subtle yet tangible improvements to her English over the course of the novel. But her newfound sense of empowerment is deflated when she is recalled by the government office she works for—a reality check that forces her to confront any romantic illusions she has been harbouring and make hard decisions about her future.

Guo’s triumph is in balancing a series of tensions—between poetry and pidgin; humour and poignancy; East and West; lust and devotion—without ever letting extremes get the upper hand. Time and again she thwarts our assumptions, never resorting to stereotypes or platitudes because, well, perhaps she doesn’t know any yet. No tigers lurking here, just captivating writing and fascinating insights into a complex culture.