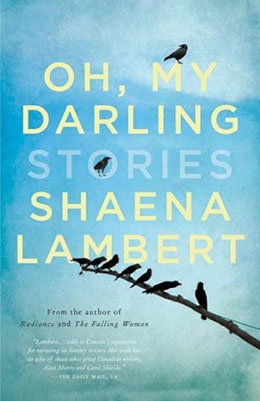 OH, MY DARLING
by Shaena Lambert

“You love to read myths and fairy tales; stories with dark centres. The children always perk up, lean forward. Why? Because something is at stake: death has entered the building.” That something must be at stake is as fine a description as any for what makes a story work; it’s also, in a way, the nexus between fiction and life. Borrowing from corporate parlance (not necessarily a good idea), you might say that this makes readers narrative “stakeholders.” And yet that is what makes Shaena Lambert’s second collection of stories so fiercely good: she makes us feel we personally have an stake in each of her short, sharp tales.

The quote above comes from the title story, whose narrator is what you might call a gender-specific grim reaper for the present age. The “you” being spoken to—who is on the cusp of discovering the narrator’s nefarious presence in her breast—is Vanessa, a schoolteacher in early middle age who’s just spent the morning fighting with her teenaged daughter. Addressing Vanessa as “dear” and “darling,” and describing himself as “a combination of Humbert Humbert and Jack the Ripper,” the narrator speaks in treacly, sarcastic asides of the ordeal to come.

What follows the diagnosis is a cathartic mending of bridges: Vanessa’s husband’s “gallivanting [falls] away like an invisible garment,” her daughter reads to her in bed. Lambert’s casually tossed off sentences often contain multitudes. But though I admire the story, I confess I have a personal dislike of personifying cancer as a sinister antagonist, perhaps because it bolsters the notion of it as “battle” with someone or something to be won or lost. (Lambert was suffering from the disease when these stories were written.) But I possibly have a double standard, as she does something very similar in “A Small Haunting,” about an illustrator who experiences a creative block as a haunting by a demonic little girl, in a way I found chillingly effective.

The stories seem to fall roughly into thematic pairs. Marriage and relationships are ubiquitous, but “The War Between the Men and the Women” and “The Cage” focus specifically on the price we pay for them. The latter begins early in the morning on the steps of a Vancouver marine park, where Leila is locking her husband Manfred, a career environmental activist, into the cage where he will stage a protest. The two are in late middle age, and there’s a quotidian air to the proceedings. In his heyday with Greenpeace, however, Manfred used to cap off a long day chained to a log boom by drinking beer and bedding his young female acolytes while Leila remained at home with their young daughter, “starved for adult companionship.” At the time, her response to his ready confessions—honesty, as everyone knows, is supposed to be a good thing in a marriage—had been to visually objectify the women as “an array of cunts.” Now, like Mrs. Dalloway, she breezes through the market buying flowers and the lunch she will slip to Manfred through the cage’s bars. It is, Lambert suggests, a version of happiness.

In “The War Between the Men and the Women” a Women’s Studies professor named Jane recalls scenes from an upbringing spent under the shadow of her parents’ fraught marriage. “Back in 1968 spontaneity had reigned. Women screamed and hurled china. Men got drunk and groped their students. Children threw themselves from the cliffs at Lighthouse Park, landing ramrod straight in the churning water. Everybody wanted things. Everybody asked and dug and jabbed and screamed—got stoned, got drunk: wanted. But now the Age of Aquarius was over, and a new age had been ushered in: the Age of Boundaries.”

When Jane and her husband need to resolve something, they schedule a meeting where they use conflict management techniques. And yet seared in Jane’s memory is an image of her alcoholic, caftan-wearing mother stroking her father’s head in her lap. He is pleading with her about something, and his erstwhile patronizing arrogance is momentarily obliterated by the image of his scalp turning pink where his hair parts. “What makes oblivion so worth it?” Jane wonders with what might be a whiff of yearning.

Karma might be at play in “The Wind”—in which a woman’s affair with her friend’s husband is “punished” when the latter’s son gets eaten by cougar while on her watch. It’s even more potently there in “Clams,” which starts with a retired lawyer named Kenneth reading a letter he has received out of the blue from an old lover. Kenneth had nearly forgotten Priscilla, the clam fisherman’s wife he had an affair with when he was a forestry student. And yet here she is declaring, in sweetly worded prose, that their summer dalliance of fifty years ago was “the happiest time of my life.”

Priscilla’s chief value to Kenneth was her status as stolen goods, and he condescendingly dismisses her nostalgia as “the gambit of a lonely widow. Pathetic.” And yet a month later he sneaks away from his wife and takes the ferry to the seniors’ home where she lives, hoping to surprise her. He’s there for an ego stroking; what he gets instead is a brisk comeuppance. When he stands in her doorway and declares his identity, “Prissy” is dubious, sarcastic; “You’re nothing like him,” she spits. Kenneth had reduced her to a conquest—he had called her “Frank’s wife”—and it turns that out his only use to her, similarly, is as a symbol, a metonymy, of her lost youth: “Why should she have such access to his boyhood self when Kenneth himself had nothing?”

One of two very strong tales about difficult father–son relationships, “The Coffin Story” is about a widower in a small Scottish town who fills his days plotting how to get his coffin down the narrow stairs of his apartment above the ironmongery he founded. The story is told from the point of view of his son, Jackie, who now runs the shop. When Jackie and his sister were growing up, Pa had been a despot, a “monster of punishment.” His dotage, however, has transformed him into “a bewildered gentleman in sheepskin slippers and tartan robe.”

The story’s brief denouement is easy to miss when it comes. On the back of an envelope, Jackie has sketched a simple pulley system for the coffin, which he presents to Pa. Though the plan itself doesn’t elicit much comment, Jackie feels “praised to the roots of his hair” when Pa remarks on his good handwriting. Paternal approval, inevitably sought despite of the unworthiness of its bestower, finally achieved. The kicker is that when the time comes the coffin goes down the stairs with very little effort.

The collection’s closer, “In Delphi,” is a bookend to the first. For her fiftieth birthday, Maya’s husband Nathan has fulfilled her lifelong wish and brought her to Delphi, “the seat of primordial wisdom,” where she will ask a single question at the temple of Apollo. It turns out they needn’t have travelled so far; as Maya trots off to probe her fate it’s Nathan who suddenly has a clear premonition of her  cancer diagnosis. Not wanting to ruin her obvious joy though, he keeps it to himself. “Let’s go, my darling,” he cheerily replies when she suggests they go for dinner. There’s that term of endearment again—we have come full circle—the difference is that this time it’s meant sincerely.