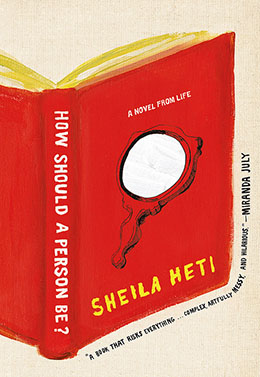 HOW SHOULD A PERSON BE?
by Sheila Heti

How should a novel be? Despite centuries of prodding and experimentation, most people still have fairly entrenched opinions about this. Sheila Heti’s latest does its best to flout, sometimes lavishly, standard definitions of plot, character and form—not to mention fiction versus reality. But at the heart of the flouting is a theme almost sweetly banal in its simplicity: writer’s block; in this case brought on by Heti’s attempts to fulfill a commission to write a play. It’s easy to get lost in the meta-ness of it all and imagine also that the wide critical acclaim Heti received for her first two books, the short story collection The Middle Stories and the novel Ticknor, which effectively declared her the Future of Interesting Writing in Canada, added to the pressure of producing this novel.

Although the protagonist of How Should A Person Be? is someone called Sheila Heti, Heti herself has indicated that it contains enough fiction to stop it being a memoir. It may be suspiciously close, however, to a roman à clef. Large passages are made up of transcribed conversations and emails between Heti and her artist friends, including, most significantly, the painter Margaux Williamson. The two also collaborated on Williamson’s recent film, “Teenager Hamlet.” The book and the film were in fact launched together along with an album by the musician Ryan Kamstra, who completes the trinity with by appearing in all three works.

The novel begins in the aftermath of the dissolution of Sheila’s marriage to her husband, who in real life is the music critic and author Carl Wilson. Wilson (who also has a bit part in Teenager Hamlet) has been a stalwart public supporter of his ex. The demands of fiction notwithstanding, however, the novel can’t have been an easy read for him at times (in a recent essay he writes of the intensity of being “sampled” in the service of art).

Despite the fictional Sheila’s blaming the breakup on her own misguided ideas about commitment: “I thought about marriage day and night. And I went straight for it, like a cripple goes for a cane,” her marriage drains her life force, her good luck and her sense of destiny. So much so that when she finally moves into her own apartment, she bemoans the fact that “No amount of work could compensate for what I had lost since my decision to marry—a feeling of ease, of having some direction in the world.” It even contributes to her writer’s block by impeding her ability to think about the subject of her play, women, because: “the whole time I was married, I thought only about men—my husband in particular.”

As her marriage ends, Sheila’s connection with Margaux deepens. Although the friendship remains platonic, a combination of mutual shyness, admiration and awkward silences makes the process feel like a courtship. To renew her depleted sense of identity, Sheila now looks to Margaux—whose confidence and never-quit attitude to art she admires—for clues as to “how to be.”

While debating whether or not to “renounce” the play, Sheila takes a job at a hair salon, where she hopes to test the accuracy of a career survey she once took in high school. She also begins a sexually charged relationship (or whatever the complete opposite of platonic is) with a snakelike seducer named Israel whom we come to hope is one of the novel’s more fictional elements.

But Sheila’s endless tapping of Margaux for inspiration hits a snag when she discovers her friend, hollow-eyed and quilting, sitting in front of the TV in her apartment. Sheila instantly recognizes that in her quest for “how to be” she has plagiarized Margaux and sapped her of her artistic vitality.

There is, of course, a healthy dollop of self-indulgence in all this. Sheila and her friends fill their days debating the merits of art and trying to make each other feel famous. They question the nature of beauty by staging an ugly painting competition. They drink and smoke and attend art openings and poetry launches. In other words, this is not one of the books Yann Martel should be sending to Stephen Harper.

Indeed, there are times when the novel practically wallows in the decadence of art and unfettered youthfulness (animals and children make no demands on this group). This is offset in a meaningful way by the ballast of Heti’s stalwart good humour and enviable word-smithing, although the book doesn’t entirely succeed in keeping up the charm assault evident in its first half. By the time How Should A Person Be? ends, it’s not apparent if Sheila has truly answered the question she began with. She does, however, attend a play (hers?) and feels happy when she runs into her ex-husband during the intermission.

Comments: Comments Off on HOW SHOULD A PERSON BE?
by Sheila Heti Posted by: admin Categories: Adult Fiction, Reviews Tags: Toronto Star
← AT HOME:
A Short History of Private Life
by Bill Bryson
THIS BOOK WILL NOT SAVE YOUR LIFE
by Michelle Berry →