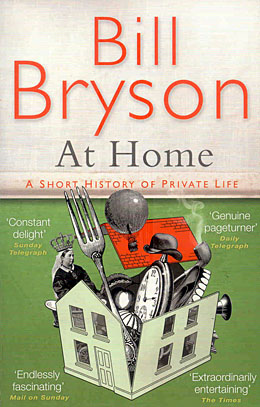 AT HOME:
A Short History of Private Life
by Bill Bryson

When at the end of the movie version of The Wizard of Oz, Glinda, the Good Witch of the North, asks Dorothy what her fantastical journey has taught her, Dorothy contritely replies that: “If I ever go looking for my heart’s desire again, I won’t look any further than my own backyard.” Similarly chastened, perhaps, by the experience of writing 2004’s ambitious and immensely popular A Short History of Nearly Everything, Bill Bryson’s latest book trades up quarks and protons for fish knives and salt cellars, attempting to do for the domestic realm what he once tried to do for the universe (explain it).

Bryson’s point of departure is the 150-year-old rectory where he lives with his family in the English countryside (Bryson is an American anglophile who has become—in the way of Henry James and Edward Gorey—almost more English than the English). Although the book ventures as far back as the Stone Age, the main focus of Bryson’s study is the 19th century, a time during which, he maintains, “the modern world was really born.” In his introduction, Bryson describes how his search for the source of a mysterious drip led to his discovery of a previously unnoticed, almost inaccessible, door leading from the attic to the roof. This, along with other Victorian “architectural bewilderments” of his home, caused Bryson to consider how little he really knew about the everyday things in his life; he also thought hard about the appeal of writing a book entirely in slippers.

Each chapter of At Home is titled for a different part of Bryson’s rectory, beginning with “The Hall”—an area notable for its precipitous fall from grace from the most important part of the home merely a place where we wipe our feet before moving on.

Much of Bryson’s charm is in his humour. It’s also in his labyrinthine detours from the purported topic of discussion. “The Study,” for example, ends up discussing the sex lives of rats. “The Passage” spends several pages on early skyscraper construction, while “The Cellar” gives a fascinating explanation for why the building of the Erie Canal made New York City what it is today. “The Nursery” more or less stays on the topic of children, but its preoccupation with infant mortality and Victorian-age floggings makes you wish it didn’t (“The world before the modern era was overwhelmingly a place of tiny coffins.”)

Master of the seamless segue, Bryson’s distractible wanderlust appears to build with each turned page, so that by the time we get to the last chapter, “The Attic,” he barely bothers with the topic at all, going instead straight into a discussion of Darwin’s Beagle voyage and the advent of science. (Bryson must have been exhausting as a child.)

At Home is chock-a-block with party-ready facts and portraits of colourful personalities running the gamut from the remarkable to the odious. One interesting theme that emerges is the historic effect of taxes on peoples’ living conditions. The brunt of a series of punishing window taxes (some of which took into account the thickness of the glass) begun in 1696, for example, ended up being borne by servants, who were forced to live in dark, airless rooms, a trend that continued until the taxes were abolished almost a century later. Similarly, “death duties” imposed on large landowners already suffering under the effects of an agricultural depression in the 1870s directly led to the mass selling-off of British stately homes and their contents—much of which ended up in the hands of wealthy Americans. And needless to say, personal hygiene improved immediately after a long-standing soap tax was abolished in 1852.

“The Bathroom,” in particular, offers a trove of fascinating observations, including the general one that: “The most notable feature about anecdotes involving toilet practices is that they always—really, always—involve people from one country being appalled by the habits of those from another.” Bryson frequently debunks popular myths, one being that the word “crap” came from the inventor of the toilet, Thomas Crapper. As it turns out: “crap in the lavatorial sense is very ancient and crapper for a toilet is an Americanism not recorded by the Oxford English Dictionary before 1922. Crapper’s name, it seems, was just a happy accident.”

Enduring etymological mysteries are solved, including the origin of the room “board” from the phrase “room and board.” The term, we learn, dates from much of the time before the 20th century when people ate off of planks instead of dining tables, the “board” eventually becoming synonymous with the food served on it, and lodgers, in turn, becoming known as “boarders.”

More than anything, At Home gives us the lottery-winning sense of relief of having been born into the relative luxury of now instead of the unthinkable squalor of most of the past. Bryson rather deflates this smugness in his conclusion, however, with a reminder of the environmental costs of these creature comforts. “The greatest possible irony,” he writes, “would be if in our endless quest to fill our lives with comfort and happiness we created a world that had neither.”

Comments: Comments Off on AT HOME:
A Short History of Private Life
by Bill Bryson Posted by: admin Categories: Adult Non-fiction, Reviews Tags: english countryside, fantastical journey, good witch of the north, point of departure, Toronto Star, wizard of oz glinda
← THE SKY IS FALLING
by Caroline Adderson
HOW SHOULD A PERSON BE?
by Sheila Heti →