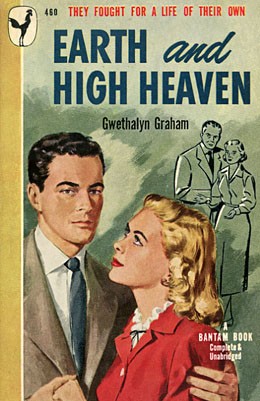 Time has not been particularly kind to the Canadian social-realist fiction that emerged post-war during the late 1940s and early 50s. Eclipsed by the stars of subsequent decades—the Gallants, Munroes, Richlers, Atwoods: you know them—the novels of this time have largely come to be seen as stepping stones to the literary riches yet to come. Hugh MacLennan’s Two Solitudes earns most of its keep these days as a hoary catchphrase in politics and the media, perhaps because the racket caused by the novel’s self-conscious mythmaking and ethnographic didacticism make actually reading it hard going. Morley Callaghan, likewise, still gets lip service as a Canadian Writer of Importance, but few people seem to be able to stomach his individual novels anymore. 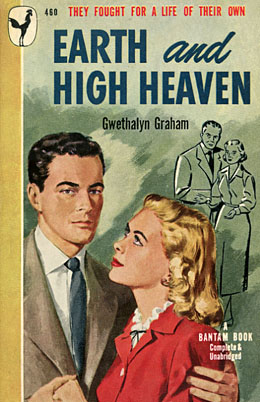 Two Solitudes won the Governor General’s Award in 1946 then went on to a contented life as a literary studhorse on undergraduate syllabi. The outcome was not as happy for Gwethalyn Graham’s Earth and High Heaven, which not only won the Governor General’s Award the year before Two Solitudes, but went on to become the first Canadian novel to capture the holy grail: #1 on the New York Times bestseller list—a perch where it remained for the better part of a year while selling almost a million and a half copies, an astonishing figure for the day. Graham became, for a time, a literary celebrity whose pockets required further re-lining when Samuel Goldwyn optioned the film rights to the novel for $100,000 (the film was never made). The payday didn’t last, however; when Graham died of a brain tumor at the relatively young age of 52, she was practically broke.

Unlike MacLennan or the prolific Callaghan, however, Graham never produced another novel. This, despite the fact that she was only 31 when she wrote Earth and High Heaven and a babe-in-arms of 25 when she wrote her first and only other novel (which also won the Governor General’s Award), Swiss Sonata—a rather plodding depiction of prewar racial tensions played out within the social microcosm of a Swiss girls’ boarding school. After enjoying its time in the sun, however, Earth and High Heaven fell into obscurity and eventually went out of print until its resurrection by Cormorant Books in 2004.

The wild success of the novel is all the more startling given its subject matter: a harsh critique of entrenched anti-Semitism in wartime Montreal told through the story of forbidden love between a 28-year-old woman of wealthy Westmount stock and a 33-year-old Jewish lawyer from Ontario mining country. Establishing the tenor of the times on the first page, Graham pre-emptively beats MacLennan at his game, seeing his two solitudes and upping the ante with one more: “Hampered by interreligious distinctions to start with, relations between the French, English, and Jews of Montreal are still further hampered by the fact that all three groups suffer from an inferiority complex—the French because they are a minority in Canada, the English because they are a minority in Quebec, and the Jews because they are a minority everywhere.”

Erica Drake is the novel’s liberal-minded heroine, her opinions the conduit for Graham’s outrage about Canada’s appalling “none is too many” policy toward Jews fleeing war-torn Europe. And this being decidedly not a coming-of-age story, Graham’s initial description of Erica remains inviolably true right until the novel’s last page: “There was nothing put on about her and nothing hidden. You could tell at a glance that she had a good brain, that she was generous, interested, and highly responsive. Her manner was neither arrogant nor self-deprecating; it was as though she had already come to terms with life and had made a good bargain, asking little on her side, except that she might be herself.” (Like Erica, Graham also came from a wealthy, intellectual family in Toronto’s prosperous Rosedale neighbourhood. She moved permanently to Montreal in her early 20s.)

Outsiders refer, in breathless whispers, to Erica’s establishment Anglo family as simply “the Westmount Drakes.” But the Drakes’ star appears to be waning. The family’s business in “sugar, rum and molasses from the West Indies” was hit hard by the Depression. Her own personal prospects put in limbo after her fiancé was killed in a car accident seven years earlier, Erica takes a job as the “Woman’s Editor” for a local newspaper, thus precipitating her overnight social drop: “from the class which is written about to the class which does the writing.”

Marc Reiser meets Erica when her brother-in-law René drags him to a cocktail party at the Drakes’ then leaves him to fend for himself in a room full of passively hostile strangers. Distinguishing her novel from so many dime-store romances, Graham downplays the physicality of Erica and Marc’s connection, giving us extreme temperamental compatibility in the place of unbridled lust. Erica’s rather clinical initial appraisal of Marc’s charms is subjected to a colder shower still when she expresses the off-putting thought that “his unusually fine body and a physical grace … reminded her of her sister Miriam.”

Graham clearly felt the need to play Marc against stereotype, doubtless to make the novel accessible to a broad readership. As a result, Marc is an agnostic whose Jewishness is presented as a fact of race rather than of religion. He is: “more middle-class and small-town Ontario than particularly Jewish.” There are references, likewise, to Hitler, Kristallnacht and the holocaust, but most are made indirectly.

The encounter at the Drakes’ launches the start of Marc and Erica’s relationship, one that remains thwarted for most of the book’s 300 plus pages. Most of that thwarting comes from Erica’s father, Charles, who up till this point, we are told, has been a closet “radical” with amorphous political ideas and a tendency toward self-contradiction, his vaguely misanthropic individualism demonstrated by his eschewing of his own cocktail party to listen to “crazy modern” music on the custom-built radio-phonograph in his study.

Convinced Charles will be as besotted with Marc as she is, Erica attempts an introduction, only to be dumbfounded by Charles’ refusal on the grounds Marc is a Jew. Assuming this to be just momentary intransigence—after all, her father eventually capitulated on his son’s marriage to a French Catholic—Erica pushes the issue, only to have Charles dig his heels in even further.

It’s broadly hinted that race may not be the only reason Charles thinks Marc isn’t good enough for Erica. While it would be going a bit far to suggest that incest is at play, Erica and Charles’ bond is depicted as more akin to husband and wife than father and child. Erica, who always refers to Charles by his first name, is “the only human being who really understood him and with whom he did not have to put up a false front of consistency.”

Charles’ dismissal of Marc coupled with Marc’s own casual rejection of Erica’s suggestion that he look at a local apartment on the grounds that they “don’t take Jews” are a tipping point for Erica; one where a sinister social reality is suddenly made manifest in a flesh-and-blood individual:

… she was listening to other voices repeating phrases and statements which she had heard all her life without paying much attention, because they had been said so often before and were so tiresomely unoriginal, but which had abruptly become significant, like a collection of firearms which have been hanging on the wall for years unnoticed, and then are suddenly discovered to be fully loaded.

Dialogue is the lifeblood of Earth and High Heaven and the locus of Graham’s considerable skill as a writer. It’s what makes the novel feel more modern than many of its contemporaries. Ditto for the lack of histrionics, of sentimentality and the almost blatant disregard for literary doilies such a symbolism or allusion.

The anti-Semitism crucible was what made the novel controversial when it was first published, but it is arguably as a feminist fiction that it resonates most today. Early in the novel, Erica says that she wants “what every woman wants” which, presumably, is marriage. But Erica can only get this—for even Marc thinks marriage will require too much of a sacrifice on Erica’s part—by exposing and combating one of the great hypocrisies of the age; in other words, she must enlist her “good brain” to argue rather than plead her way to the altar. “After all,” Erica baits Charles sarcastically, “We don’t disagree fundamentally with the Nazis about the Jews, we just think they go a bit too far.”

In this and in other respects, male and female roles are reversed: Charles, overly ruled by intuition and emotion, is no match for the onslaught of rationality meted out by his wife and daughter. And Marc, for his part, merely takes the role of passive hand wringer. Erica gets her way in the end, but a happy ending is still far from assured—the long sought-after engagement coming just as Marc is about to leave for the front.

In comparison to Graham’s, Hugh MacLennan’s writing often seems to hearken from an earlier age. Yet MacLennan was one of Graham’s greatest friends and champions. Cormant Books’ publisher, Marc Côté, who got Earth and High Heaven back into print, first became aware of the book when he took a course on the 20th century novel with MacLennan at McGill in the early 80s. When Côté asked MacLennan why there were no Canadian novels on the reading list, MacLennan said the only one good enough was no longer in print. The book was Earth and High Heaven.

Earth and High Heaven is enjoying a resurgence of sorts as it creeps its way onto university course lists in both CanLit and Women’s studies. In her well-researched 2008 biography, Barbara Meadowcroft also sought to put Graham in her place as a major Canadian literary talent and forward social thinker. Others, including the New Yorker’s film critic, Anthony Lane, have not been so generous. In a 1995 piece revisiting the 1945 bestseller lists, Lane praises the novel’s ethics then excoriates Graham by saying that “the best intentions have a nasty habit of breeding the worst art.” He further charges that “while everyone else was doing their best to win a war, Gwethalyn was blithely doing her worst, by writing prose.” Ouch. 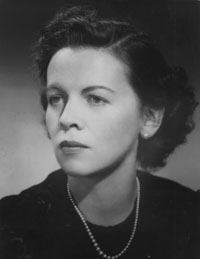 Graham is not the first Canadian writer to be accused of prescriptivism, of course, but her very real achievements as a writer have been neglected for far too long. Despite being one of the few Canadian female writers of substance in her day, Graham managed to rise to the top of a very tall heap and stay there. In Erica Drake she left us a fiercely intelligent female character whose articulate questioning of social convention often rivals Austen in its sophistication. And anyone who knows Montreal will find in the novel the fascination of a city at once familiar and utterly alien. As a novel strongly based on dialectical thrust-and-parry, I concede that it would probably have made a rather poor film—but unlike Anthony Lane, I mean that in the best way possible.