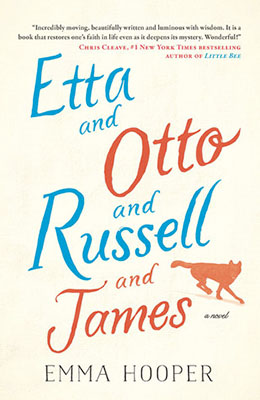 ETTA AND OTTO AND RUSSELL AND JAMES
by Emma Hooper

Etta and Otto, the first two characters in the title of Emma Hooper’s debut novel, are a childless, elderly couple from rural Saskatchewan. On page one, Otto wakes to find a note from Etta: “I’ve gone. I’ve never seen the water, so I’ve gone there. Don’t worry, I’ve left you the truck. I can walk. I will try to remember to come back.”

Otto, like any loyal spouse, can finish 84-year-old Etta’s sentences as well as her thoughts, so he quickly concludes she is headed for the Atlantic coast. Her reason for doing so and Otto’s for not trying to stop her, however, are for him to know and for us to find out.

From here, we slip continuously between the present, in which Etta walks and Otto waits—he fills his time caring for his newly adopted guinea pig and building a menagerie of life-size papier-mâché animals—and the past, where we get an account of Etta and Otto’s first meeting when she was a teacher and he her (slightly younger) pupil at the local school and their epistolary courtship when Otto joins up to fight in the Second World War.

That Etta’s journey has a psychic or spiritual dimension is implied, in part, by the novel’s magic realist elements, the most magical of which is Etta’s traveling companion, a talking coyote named James (the most fantastical is the total absence of biting insects when Etta sleeps, unsheltered, in northern Ontario’s wilderness in high summer).

The book’s title offers a hint of Hooper’s intentionally naive, conjunction-drunk style. She has a rare passion for the word “and” as well as for list-making and enumerating, which, in combination, sometimes pushes the novel into tweeness. Repetition is often used in lieu of adverbs: we’re told Otto “slept and slept” or “searched and searched”; that his army battalion “walked and lifted an shuffled and marched and walked and lifted and marched.” Not only does Hooper’s omniscient narrator speak this way, her characters do too: “I will make and make until you get back,” Otto writes to Etta with regard to the stack of recipes she has left him.

The style is most obviously reminiscent of a fable or storybook, but Etta and Otto and Russell and James is not aimed at children (fables aren’t usually 300 pages long, either). Nor, despite the presence of sentient animals, is it baldly allegorical like Animal Farm or Pilgrim’s Progress. Hooper’s approach to mise-en-scène conjures a Wes Anderson film: all static, locked-off tableaux or restless tracking shots. In dialogue, characters speak sparingly, without much affect.

Picasso was capable of depicting his subjects in a conventionally representational manner but adopted Cubism to make a point about perception. The comedian Sarah Silverman delivers her material in a little-girl voice to amplify its shock value. What Hooper’s style does for her subject matter, on the other hand, is less apparent—it’s fable-ish qualities suggest that she wants to give Etta and Otto the burnish of timelessless. But various chronological breadcrumbs—a young boy with a cellphone, Otto’s age during the Depression, a cashier bobbing away with headphones on—all triangulate to a setting in the not-so-distant past. This not only conspires against whatever aspirations toward universality Hooper might have, it also raises expectations and sensitizes us to further clues. When, after several weeks, Otto wonders where Etta—who has become, at this point, something of a media sensation— might now be, we in turn wonder why he doesn’t just turn on the TV or open a newspaper.

But my chief gripe with the novel’s style is the way it both flattens and infantilizes its characters, especially Etta, who is in the early stages of dementia. Though Hooper constantly strives for poignancy, her characters’ lack of depth, their dulled emotions, keep getting in the way. A putative love triangle between Etta, Otto and Russell, the fourth titular character—who grew up on the neighbouring farm and whose love for Etta, even in her dotage, appears to be unrequited—has had all its corners conveniently rounded so no one bumps their shins.

In early flashbacks, Etta’s pregnant, teenaged sister Alma decides to go to a Halifax convent where she will later die in childbirth. It’s a pivotal moment that is again, to my mind, undermined by Alma’s description of her decision-making process: “I’ve thought and I’ve thought and I’ve thought and, that’s it. I’m going.” This is all the more unfortunate given that Alma’s death is one of the few places where Etta and Otto and Russell and James strikes a genuinely emotional chord. But it’s a chord that Hooper’s chosen instrument is unable to sustain.

Comments: Comments Off on ETTA AND OTTO AND RUSSELL AND JAMES
by Emma Hooper Posted by: admin Categories: Adult Fiction, Reviews Tags: Fiction, Globe and Mail
← HER
by Harriet Lane
OUTLINE
by Rachel Cusk →