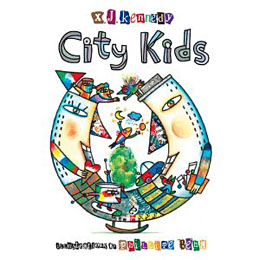 As the title suggests, the poems in this collection, culled from X.J. Kennedy’s previously published work, are meant to reflect the experiences of children growing up in urban environments. Kennedy, who is American, sets his work on both sides of the Canada/U.S. border, touching down in San Diego, New York City, and San Francisco, as well as Toronto, Windsor, and Quebec City.

Although many of the poems deal with subjects specific to their locales (e.g., a Red Sox game or hockey in a Windsor park), many others, particularly those that focus on people, have a ring of universality: there are the leaflet hander-outers on street corners, the man who roasts chestnuts in the park, street performers, graffiti artists, and the “finding man” who rummages through trash cans in search of stuff to recycle.

At his best, Kennedy is thought-provoking without being obscure. Although much of his work is light and whimsical, he shows a willingness to take on more serious subject matter. In one poem, a boy reminisces about a local firefighter who “met / The worst fire ever, all / Those people running hollering down stairs / In the World Trade tower ready to fall.” In another, he invokes both the isolation and communality of apartment-living as a child tells of the sudden death of a kind neighbour: “One day when Poppa heard her fall / Ka-thump, he ran and found / Her lying stone cold on the floor. / Those bruises don’t show anymore. / Us neighbours, we’re around.”

There are times when Kennedy tries a little too hard to get down with the kids, as it were, and gets stymied by language that will no doubt strike younger readers as stodgy or out of date. “In the Library” offers one such example: “I love to search on the main computer / I’m a champion hacker, a real cool booter.”

It is hard to imagine a child reading these poems alone, but many would be excellent for group discussions. The book also benefits considerably from Montrealer Philippe Béha’s colourful, stylized illustrations, which interpret the work sensitively and creatively.