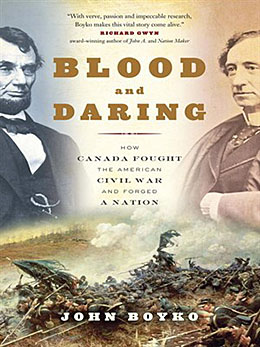 BLOOD AND DARING
by John Boyko

For as long as most of us can remember, “good neighbours” has been the default epithet for Canada/U.S. relations. And if our requests for cups of sugar have occasionally been made through gritted teeth, it has arguably made the metaphor more, not less, apt. But as historian John Boyko’s informative and often engrossing book about Canada and the American Civil War shows, it wasn’t always thus; in the century preceding the war, backstabbing and bloodshed were often the order of the day.

America had already attacked Canada twice before the war (notably during the War of 1812). By the time it ended in 1865, Lincoln’s Secretary of State William Seward was cranking up talk of annexation and Manifest Destiny just as Britain was making plain its reluctance to continue defending colonies whose worth was increasingly coming into question.

Then-Prime Minister John A. MacDonald believed that future attacks could only be prevented by uniting the disparate colonies strung between the Maritimes and British Columbia. Though we tend to think of Confederation as the inevitable outcome of a slightly tedious series of negotiations, as Boyko ably demonstrates, the war provided the flame that helped turn a nice idea into a strategic necessity. If good fences make good neighbours, then Confederation has been a very fine fence indeed.

The Civil War helped create Canada, but approximately 40,000 Canadians and Maritimers also fought in the war itself. Though most did so on the Union side, sympathy for the Confederate cause was not insignificant, particularly within the Catholic Church. A number of Confederate plots—including the one to assassinate Lincoln—were hatched from Toronto and Montreal; arms were supplied to Confederate troops from a manufacturer in Guelph, Ontario; Southern ships given access to Halifax harbour.

Boyko filters his account through six “guides,” three of which—MacDonald, Seward and George Brown—are well known. Though their stories bear re-telling in the current context, it’s the tales of two now-obscure figures—a fugitive slave and a cross-dressing nurse—that are the book’s liveliest and most interesting.

John Anderson came to Canada from Missouri in the 1850s via the Underground Railroad. Anderson had inadvertently killed a white man during his escape, and for years slave-holding interests had aggressively demanded his return to the U.S., where he would face certain execution. Though Canada came close to capitulating, Anderson was ultimately tried and acquitted according to Canadian law at a sensational trial in Toronto that made international headlines. The trial stoked Southern resentment toward abolitionists that helped tipped the scales toward war, but it also stirred nascent feelings of independence in Canada and the Maritimes.

Blood and Daring’s most colourful character by a longshot is Sarah Emma Edmonds. Originally from New Brunswick, Edmonds was among the 550 women who disguised themselves as men to serve in the war. After initially working as a nurse for the Union side, Edmonds became a spy and even took up arms in the battle of Williamsburg. She managed to penetrate enemy lines on several occasions, first by posing as a liberated slave named Ned, which she accomplished by dying her skin black and perfecting a field hand’s broken English, and later, ironically, as a woman.

Many Canadians saw the Civil War as proof that America had taken a fatally wrong turn; as with today’s gun debate, it served as a touchstone limning differences in cultural values. Of all those values, politely keeping our collective opinion to ourselves may well be the one that has served the relationship best over the years.