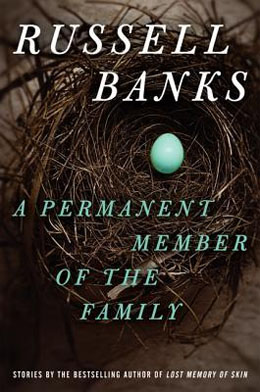 A PERMANENT MEMBER OF THE FAMILY
by Russell Banks

In one of the stories in Russell Banks’ sixth collection, a churlish heart transplant recipient reluctantly agrees to meet his donor’s wife then capitulates to an unusual request from her at a public monument. The story ends with this line about his nurse, who’s been observing the scene from afar: “After a few seconds she walked back to the driver’s side, got into the vehicle and continued to wait.”

Strange or even violent acts are often counterbalanced by these kinds of mundane gestures in Banks’ stories, whose action is a bit like waves hitting the beach: they roll toward you with steady force then pull back slightly just after cresting. (Parts of Banks’ own personal narrative read like this too: he ran away from university to join Castro’s revolution in Cuba, but ended up working in a Florida department store instead.)

Parking lots figure prominently in these stories, usually as neutral, liminal spaces between actions and movement, though in “Green Door” a Las Vegas parking lot becomes the staging ground for an act of violence ignored by the protagonist out of contempt for its victim.

Dogs come up a fair bit too. One story, “Blue,” combines parking lots and dogs. In it, a woman named Ventana becomes trapped with an angry pitbull in the lot of a car dealership after its employees, forgetting she’s there, lock up for the night. When a call to 9/11 proves fruitless—as she knew it would, being black and from a poor part of town—a local TV news station is summoned. But after a quick interview yelled through the chain link fence to the car roof to which Ventana has retreated, they too pack up and leave her there to wait until the dealership opens again in the morning.

This is the most physically literal example of the many kinds of perilous or isolating situations Banks’ characters find themselves in, often while they’re in the presence of others. The eponymous protagonist from “Former Marine” takes to robbing banks after losing his job as an auctioneer despite having three sons, two of them in law enforcement, offering their financial support.

And when good things happen, it gets complicated. In “Big Dog” (ironically, not about dogs), Erik, an installation artist, uses the occasion of a dinner party at a friend’s house to announce that he’s been awarded a McArthur “genius” grant then immediately finds himself under attack by a guest who surgically exposes his insecurities about the legitimacy of his work.

Banks has always been a writer of profound morality and conscience; his greatness lies in the fact that he never allows these things to penetrate the surface of his words. The blue-collar men and women—their lives shaped by forces beyond their control—that have populated Banks’ books since the late 70s and who drove his biggest successes in novels like Continental Drift and Rule of the Bone are still here. But like Banks himself they tend now to be older (60s, 70s) divorced (Banks has been married four times) or snowbirds who flit between Miami and the Adirondacks.

Indeed, the story “Snowbirds,” in which a woman named Isabel finds in the sudden death of her husband and the end to her ostensibly happy 40-year marriage an unexpected rebirth, forces us to shrug off any speculation that Banks, at 73, is in a sentimental frame of mind. Isabel’s best friend Jane, who’s come to Florida to comfort her, is initially put off by her friend’s bizarrely insouciant reaction to her bereavement. But as Jane gets ready to return to “the wintry north” and to her own husband—“her dour companion and the permanent witness to her remaining years”—she acknowledges that what she really feels is envy.

Comments: Comments Off on A PERMANENT MEMBER OF THE FAMILY
by Russell Banks Posted by: admin Categories: Adult Fiction, Reviews Tags: Fiction, short stories, Toronto Star
← THE EMBASSY OF CAMBODIA
by Zadie Smith
BOOKS FOR THE HOLIDAYS: FIFTEEN OF THE MOST INTRIGUING OF 2013 →