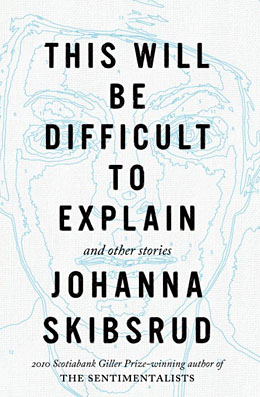 THIS WILL BE DIFFICULT TO EXPLAIN
by Johanna Skibsrud

Like the dress whose high price tag suddenly makes it irresistible, readers’ thirst for Johanna Skibsrud’s 2010 Giller-winning novel The Sentimentalists became unquenchable the moment they were told they couldn’t have it—Skibsrud’s small publisher, Gaspereau, being unable to keep up with the demand fuelled by her overnight success.

This time Skibsrud’s readers can have their book and read it, too. Her latest is a collection of short stories, many of which actually pre-date The Sentimentalists. (It is published by Penguin, which presumably has the ability to keep up with any number of prizes that get thrown Skibsrud’s way.) These being good short stories, the inevitable comparisons to Canada’s lionesses of the form, Alice Munro and Mavis Gallant, are already being trotted out. And for once the comparisons have merit, although not so much, to my mind, because Skibsrud is stylistically similar to either writer, but because she has the undeniable, rare greatness they both possess. One can only hope she’ll be as prolific.

In her recurring focus on the nature of time, in her characters’ sense of themselves as essentially fragmented, Skibsrud’s most obvious influence here is Virginia Woolf. “It had long seemed to Ginny that things happen not at any particular or recordable time, but at an indeterminate midpoint. Somewhere, that is, between the verifiable and measurable tick and the ensuing, and otherwise unremarkable tock … in that incalculable interval of both space and time” could easily be Woolf writing about Clarissa Dalloway, or Lily Briscoe.

If the collection’s impressively wide range of characters and settings is anything to go by, Skibsrud has packed a lot of living into her barely thirty years. A Croat in Red Deer whose father built bridges for the SS during the war is as convincing as a girl who tends a blind Madam in her apartment on Paris’ Left Bank or a son and father hunting for escaped buffalo in South Dakota. It was opening lines of the last story, Fat Man and Little Boy, though, that had me smitten: “Susan and Ginny were friends from the old days. They’d worked together in the translation department of a large ball-bearing company in what used to be outside the city.”

Each of these stories is its own delicate mobile, its equilibrium found in the subtle play of weights and balances dancing around an unseen fulcrum. The story of Ginny and Susan, our aforementioned pals from the ball-bearing company, takes place in Japan, where the two go to visit the Hiroshima museum. After carefully building tension in the interplay between Ginny’s reminiscences about her past and the weightiness of the locale, the whole thing collapses around Ginny’s sudden irritation with the casual way Susan speaks the names of the bombs. Sound dull? I assure you it’s mesmerizing.

While too many mid-list Canadian authors treat clauses and punctuation as a scourge to be eradicated in pursuit of that ubiquitous critical saw, “spare, unadorned prose,” Skibsrud (who also writes poetry) has an old fashioned respect for the weight of words and what they can do in a sentence. In The Sentimentalists, especially the first part, Skibsrud tended to write long—her syntax meandering in a tiered, Proustian way. Here she goes shorter, but with equal aplomb. Her endings are so simple (but not) they can take your breath away.

For too long, Munro and Gallant have given us good reason not to bother with short stories written by other people. Johanna Skibsrud is worth bothering about—and she also writes novels. Skibsrub may well owe these women a debt, but she can use some of her Giller prize money to repay it by taking them out for lunch.