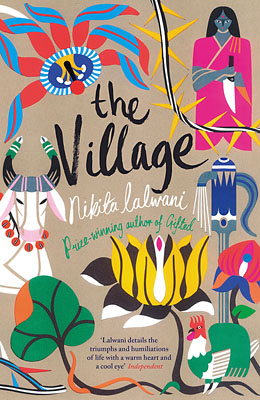 THE VILLAGE
by Nikita Lalwani

Because Nikita Lalwani writes well but for the most part without flash, her intelligent, slow-burner of a novel, The Village, can creep up and grab you unawares. It certainly did me. This is the India-born, Wales-raised writer’s second novel. Her first, Gifted, was long-listed for the 2007 Man Booker Prize and shortlisted for a couple of others.

Ray Bhullar, a woman in her twenties, has come to India from the U.K. to direct a documentary about an experimental “prison village” where convicted murderers live with their families in relative freedom. The novel’s broad but persistent theme—looking at others—is established in its first two lines: “The security men are watching Ray. They regard her with a perfect indifference.” Established too is a pervasive sense of unease and a repeating irony: the watcher becoming the watched; the judge becoming the judged.

The documentary, part of a BBC-TV series on the prison system, was Ray’s idea, and it’s her first big career break. Two colleagues have come to assist her, neither of whom she knows well: the show’s producer, Serena, and its presenter, Nathan, who, having recently served time for armed robbery, was hired primarily for his street cred.

Being of Indian descent, part of Ray’s role is to act as translator. But right away her supposed cultural advantage comes to seem like the opposite. Though she does manage to connect with one inmate, a deeply compelling woman named Nandini, many of the other villagers dismissively refer to her—if they refer to her at all—as white, or pretend not to understand what she says. Humiliating too are the endless trips to the latrines—the result of either the local water she ill advisedly drank or the chicken she secretly ate (having declared herself vegetarian).

Ray finds she can’t relax much around her colleagues, either, particularly the experienced but prickly Serena, who views Ray’s idealistic notions about ethics and impartiality as hopelessly naïve. As if to bear this out, a week of filming feel-good interviews in the picturesque village is followed by an email from Ray’s boss in London, hoping she’s tapped into “conflict, jeopardy, etc., usual stuff.”

Using tried and true old-school nature documentary tactics, Serena and Nathan find a way to toss the proverbial cobra in front of the lion. Acting on information indiscreetly given by the local doctor, they make plans to film a villager who is about to receive dire medical news. Ray feels appalled, yet powerless to stop this hijacking of her show, and morals.

Yet she’s also not above breaking her own rules when it’s convenient. In one marvelous scene, Ray attempts to film a group of labourers in a ravine without asking their permission first. The workers, who spy her right away, immediately stop work and stare back, forcing her into shame-faced retreat.

Though surrounded by murderers and colleagues of dubious ethics, Ray increasingly feels that it’s she who’s being weighed in the balance and found wanting. Shortly after a night of drug-taking with Nathan ends with Ray repelling his sexual advances by the dark riverside, she discovers that the incident was witnessed, and further, that the villagers—Nandini included—now regard her as wanton and licentious.

Lalwani’s approach in The Village departs sharply from novels like Shauna Singh Baldwin’s recent The Selector of Souls, which, by presenting itself as an exposé of cultural practices—in this case the treatment of women in India—invites the scrutiny of the wider world. While that approach has validity and power, Lalwani’s novel provocatively suggests that whenever we gaze upon someone or something, we shouldn’t be too surprised when that gaze gets reciprocated.

—Emily Donaldson is a freelance critic and reviewer

Comments: Comments Off on THE VILLAGE
by Nikita Lalwani Posted by: admin Categories: Adult Fiction, Reviews Tags: Fiction, Toronto Star
← A MARKER TO MEASURE DRIFT
by Alexander Maksik
JANE, THE FOX AND ME
by Fanny Britt, Isabelle Arsenault ill. →