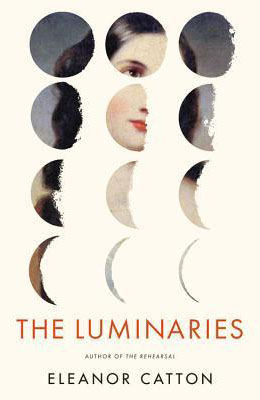 THE LUMINARIES
by Eleanor Catton

An Irish priest, a New Zealand banker, a Jewish newspaperman, a Norwegian commission merchant, a French legal clerk, a Chinese opium dealer, a Maori gemstone hunter, a Chinese goldsmith, a chemist, an hotelier, a shipping agent and a pimp—the latter all English—walk into a bar. Unless you’re Gary Kasparov, this probably doesn’t sound like the premise for a great joke. It turns out, however, to be the premise for a great second novel by a rising, Canadian-born literary star and the youngest novelist to make the Man Booker shortlist. Add to this a late-19th century setting during New Zealand’s gold rush and you’ve also got a reading experience unlikely to be sullied by readers’ preconceptions.

Near the newly established gold mining town of Hokitika in New Zealand, a perplexing series of events has taken place: on the night of January 14, 1866, a hermit named Crosbie Wells died in his cottage, an opium-eating prostitute named Anna Wetherell collapsed on a local road, the town’s richest man, Emery Staines, vanished and Francis Carver, a brutish ship’s captain, set sail on an unscheduled journey. Wells’ death has revealed not only that he had a massive, hoarded fortune of unknown provenance, but also a wife—with connections to both Carver and the aspiring politician who discovered Wells’ body while on a campaign call—who has stepped forward to claim it. Discovered in Wells’ cottage too was an unsigned note from Emery Staines promising a substantial sum of money to Anna Wetherell though the two were not known to be connected.

Each of the twelve men above holds a piece of what they have collectively determined to be a puzzle; the aim of their clandestine meeting in the smoking room of a local hotel is to put it together. But their discussion is delayed when a thirteenth man—a young fortune seeker fresh off the boat named Walter Moody—strolls into the hotel, oblivious that he is interrupting anything, and further, that he is about to be thrust into the role of detective.

Comments: Comments Off on THE LUMINARIES
by Eleanor Catton Posted by: admin Categories: Adult Fiction, Reviews Tags: Fiction, National Post
← BLOOD: THE STUFF OF LIFE
by Lawrence Hill
A HOUSE IN THE SKY
by Amanda Lindhout and Sara Corbett →