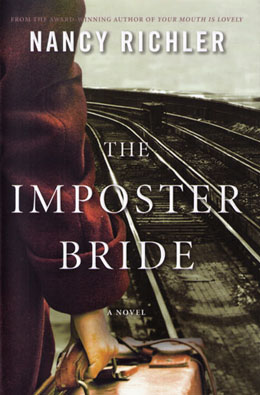 THE IMPOSTER BRIDE
by Nancy Richler

The extended Polish/Russian Jewish family that is the focus of Nancy Richler’s Montreal-based post-World War II saga includes not one but two female members abandoned by a parent. One of them is Elka Krakauer, whose father didn’t bother waiting until she was born before walking out on Elka’s imperious mother, Ida Pearl. To her daughter, Ida offers the lie that her father left to fight with “revolutionaries” back in Europe. After he dies, Elka learns the truth: that Arthur Krakauer, married with four children, had worked in a shoe shop just blocks from her mother’s jewelry store on Ste. Catherine St.:

“It was not until Elka had children of her own that Ida divulged the identity of the man who had fathered her, admitted, that is, that he was not the Arthur Krakauer who was roaming the world in search of a revolutionary or otherwise heroic cause—there was no such person, and never had been—but was one of the A. Krakauers easily found in the Montreal phone book, the third one listed, in fact. And it was only at his funeral—a typical funeral like others Elka had been to, with a grieving widow and children in attendance, and friends and neighbours talking about how nice he had been—that she fully understood just how banal his abandonment of her had been.”

In matters of genealogy, as in matters of courtship, Richler suggests, it’s the chase, not the catch. This open, and oddly refreshing embrace of anticlimax recurs throughout Richler’s engaging second novel, which may come as a surprise given its rather sensational title (not be confused with Harlequin’s The Sherriff and the Impostor Bride by Elizabeth Bevarly: A pregnant twin on the run! A darkly exotic temptation in a tan uniform!) and opening chapter, in which a young man named Nathan Kramer is in the process of marrying a woman he has only just met. Lily Azerov had, in fact, come all the way from Poland to marry Nathan’s brother Sol—an act of “charity” for which the latter was to have received, by way of payment, a leg-up at the local button-manufacturing company where he and Nathan are attempting to fill their late father’s shoes.

But Sol, apparently not the type to take the first table in a restaurant no matter how good the reviews, gets cold feet when he catches sight of Lily at the train station looking like “a piece of unclaimed baggage” and decides, literally, to walk away from the deal. Luckily for Lily, she has the opposite effect on Nathan, who immediately steps in to propose. The wedding is held a week later and Sol, seeing now “a boldness in her expression that he hadn’t noticed before,” spends the evening regretting his decision and bemoaning his lack of skill with first impressions.

Sol’s instincts ultimately turn out to be sharper than Nathan’s. Lily’s aforesaid “boldness” becomes another thing entirely when, a year later, she walks out on Nathan and their three-month-old daughter, Ruth, leaving only a note of apology and a fridge full of baby formula in her wake.

Lily’s abrupt exit is tied to an important fact established in the book’s first few pages, which is that she isn’t the person she claims to be. Back in Poland, her family dead and unwilling to wait passively for the salvation of a liberating army, “Lily” impulsively steals the identity card from the body of a dead girl. (As she does this for reasons of survival rather than personal gain, the term “imposter,” with its connotations of hucksterism, is a bit misleading.) What she doesn’t count on is the cousin of her dead namesake—the aforementioned Ida Pearl, whom the real Lily’s father trained to be an expert gem cutter—showing up, uninvited, at her wedding, or further, on her once-to-be husband, now brother-in-law, Sol, marrying Ida Pearl’s bastard daughter, Elka. This may or may not be more confusing than plot of The Sherriff and the Impostor Bride, which I have yet to read. Suffice it to say that Richler, unafraid to repeat plot points when it helps, does a commendable job of keeping everyone straight. The bottom line is that Lily suspects that Ida Pearl has her number, which she does. What Lily incorrectly assumes is that Ida Pearl intends to use this information to nefarious ends, which she doesn’t.

Richler alternates Lily’s backstory with Ruth’s coming-of-age, in particular, her attempt to build a composite picture of her absent mother from the handful of semi-random objects in her possession. These include two notebooks: a blank one her mother never wrote in and another, written in Yiddish, that belonged to the real Lily Azerov. She also has an uncut diamond—taken by her mother from the dead girl—and the series of rocks her mother starts sending sporadically and without comment from various places west of Montreal after Ruth turns six. The paucity of artifacts only deepens the mystery, of course. Lily tries in vain to get the diary translated, fingers the blank notebook in the hopes of tapping into its unseen energy, accords the rocks the status of runes. Despite these earnest attempts, as the years go by Ruth feels less, not more, connected to her mother.

In flashbacks we learn that Lily shares her daughter’s tendency to read into objects. In the real Lily’s notebook, she finds prescient dreams of “the peace that awaited her if she had lived. The peace I’m now living her place, Lily thought.” And observing that the pine vanity sent by her sister-in-law, Nina, as a wedding gift resembles one her mother had intended to give her, Lily declares to Nathan: “It’s as if your sister knew me.” Nathan, for his part, tries not to spoil the illusion by admitting his suspicion that his self-involved, actress sister likely did nothing more than phone the owner of the furniture store and let him do the choosing.

Humming always in the background of the novel is the struggle of those who survived the war to transition into the next decade, with its balm of bloated appliances and unambiguous gender roles. For Ruth and her friends, the war’s most visible legacy is the peculiarities of “nerves, temper and mood” on constant display in those of their parents’ generation (Ruth: “no one ever died in Europe, they perished”). Ruth’s sixth grade teacher is dismissed when he can no longer control the silent tears that arrive in the classroom, unannounced. Having the only mother she knows of who walked away from her child has always been a source of deep humiliation for Lily; her coming of age seems to happen at the point where shame gives way to the realization that her mother’s deed, like Mr. C’s tears, was likely not indifference, but her own idiosyncratic expression of grief.

In many ways, The Imposter Bride is a conventional novel about the tyranny of the past, of war, and the millstone of family secrets. What makes it better than many is Richler’s offsetting of melodrama with wry kitchen-sinkiness in a manner that sometimes verges on the bathetic:

“What?”
“Our need to know where we come from, to connect to who we are and where we’re going. That’s what makes us human, what sets us apart from all the other animals.”

“I thought it was opposing thumbs,” I said.

Ruth eventually decides to try to find her mother. At the urging of a friend, she hires a collection agency worker instead of a private detective (“Those guys can find anyone”) and, much to her surprise, the task is done quickly and without fuss. Now an adult with children of her own, Ruth’s questing has given way to gentle curiosity; her aim and hope is comfort, not catharsis.

The Imposter Bride recognizes our need to explore our origins and mythologies while at the same time acknowledging that personal histories are often just that—personal; that trauma, even when it is experienced collectively, is grieved individually and in unexpected ways. Ruth has always assumed that the real Lily’s notebook will reveal some kind of truth about the woman—her mother—who took it. But when Ida Pearl finally agrees to translate it, she is quick to dismiss its contents as the fantasies of a spoilt child with a flair for the dramatic—one, victim or not, whom she never particularly liked.

Despite its air of mystery, Lily’s abandonment turns out to have been, like Elka’s, almost banal, random; the diaries, the rocks self-imposed red herrings. If, as they say, electric guitars are sometimes just electric guitars, then rocks must sometimes be rocks, not runes.