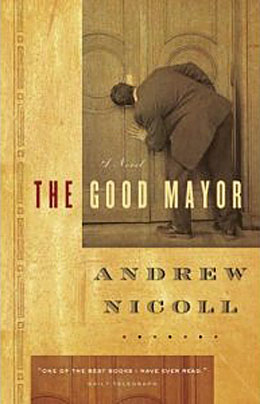 THE GOOD MAYOR
by Andrew Nicholl

“In the year Blank, when A-K was governor of the province of R, Good Tibo Krovic had been mayor of the town of Dot for almost twenty years.”

Andrew Nicholl’s debut begins with the withholding of details familiar to anyone who has ever read a 19th century Russian novel. Dot, the book’s setting, is part of a remote chain of islands in the northern Baltic at the mouth of the river Ampersand that so thwarted the mapping attempts of Catherine the Great’s team of surveyors that seven they “left in disgust” after seven years of effort.

Nicholl, notably, is not Russian but Scottish, and has lived all his life within the span of a few blocks’ radius in Dundee. The Good Mayor was published to wide acclaim last year in the U.K. and is now making the international rounds as a result of that success.

The year “Blank,” when the action begins, features mod cons—“jangling” telephones, “screeching” trams and “clattering” typewriters—suggestive of the earlier half of the last century, but Nicholl’s aspiration is toward the timelessness of a fable. The city is peopled, but its echoey public squares, marble stairs and ancient clock towers have the lonely feel of a de Chirico painting.

The narrator is the town’s long-dead patron, St Walpurnia—the “bearded virgin martyr,” whose hideous, warty countenance (meant to steer Dottian men away from sin) is plastered everywhere from Dot’s mayoral coat of arms to the sides of trams, all of which gives her a kind of literal omniscience.

Mayor Tibo Krovik earned his “Good” epithet the hard way: through stalwart honesty bordering on dullness, his long, nearly immaculate record sullied by only the occasional transgression, such as when he engineers a false rivalry with the neighbouring town of Umlaut (which, curiously, has no umlauts itself). His intention—to bolster civic pride—is, after all, an honourable one:

It was good for the Dottians to hate the Umlauters. It made the town football team play better, it made the schoolchildren study harder for the provincial spelling tests, it made the gardeners of the city parks department weed the flowerbeds a little more thoroughly and the Fire Brigade Band shine their brass helmets a little brighter. ‘Call that polished’ the bandmaster would say: ‘You’re not in Umlaut now, laddie!’”

Tibo loves his job, but most of all he loves his secretary, the efficient, capable, and curvaceous Agathe Stopak, whose perfectly painted pink toes he looks forward to glimpsing every morning beneath his office door. Agathe, stuck in a loveless marriage, fancies Tibo as well, and all seems set for a happy future.

But their ensuing courtship, which begins after Agathe drops her lunch in a fountain, proves so painstakingly long that Agathe finds herself driven into the arms of her husband’s disreputable cousin, Hektor, out of sheer frustration. The dust jacket tells us that this is a love story, so we know Agathe and Tibo will try to work their way back to each other. But it is not a mawkish or a simple one, and their path is neither straightforward nor expected—all good things for the reader, it turns out.

What follows are forays into magic, witches, circus ghosts, and even transmogrification, which may be off-putting to some artifice-wary readers. But Nicholls’ stock-in-trade is an ability to make his improbable world tangible through descriptive juxtapositions and use of the comic grotesque. Yemko Guillaume, a corpulent lawyer who paints poetry on grains of rice as a hobby and who comes to play a key role in Tibo’s fate, has a voice that comes “in strange wheezes, like the high pipes of an organ choked with lard.” The labyrinthine corridors that go from Tibo’s office to the Court Clerk’s department run “like a bit of gristle through a chop.” In one scene, where Agathe walks suddenly into Tibo’s chambers, he gives her “the sort of look that men sitting in the electric chair give to telegram boys who arrive unexpectedly in the execution chamber.”

The Good Mayor falls short of being a revelation, but it has a refreshing originality borne simply of clever writing and a sinister strangeness, the best of which comes to those who hang in till the odd, yet oddly satisfying end.