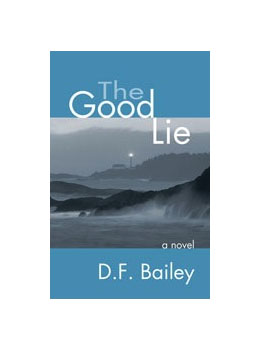 THE GOOD LIE
by D.F. Bailey

Had Crime and Punishment been set in contemporary Victoria, B.C., it might very well have ended up as The Good Lie. And while D.F. Bailey’s prose may not match Dostoevsky’s, he does exceedingly well at mining – in a modern Canadian context – the moral dilemmas and mental despair experienced by a person of conscience who commits a crime.

Paul Wakefield is on a group kayaking expedition in the stunning but unpredictable waters off Vancouver Island. The paddlers’ newly honed skills are put to the test when a thick fog rolls in just as night is falling. Separated from the rest of the group, Paul and a teenage girl, Jenny Jensen, are struck by a yacht and thrown into the freezing ocean waters. In the ensuing panic, Jenny grabs onto Paul, pulling him down with her. Acting on instinct, Paul strikes her with his paddle, knocking her unconscious. The other paddlers, who do not see the incident, assume it was the yacht that hit Jenny.

Paul’s return to daily life is the start of his slow mental unravelling. Jenny is in a coma and unlikely to revive. Plagued by tinnitus and insomnia, Paul takes leave of his otherwise satisfying government job. Despite his intense desire to unload the burden of guilt that is his constant companion, he is unable to tell the truth about what happened, even to his sympathetic wife.

Bailey’s masterstroke is in creating a situation for his protagonist that is so believable the reader cannot help but feel complicit in the guilt and anguish of it all. With compelling, measured prose, he stakes out precious territory in a genre – located somewhere between thriller and psychodrama – that he makes completely his own.

Comments: Comments Off on THE GOOD LIE
by D.F. Bailey Posted by: admin Categories: Adult Fiction, Reviews Tags: canadian context, constant companion, insurance lawsuit, Quill and Quire, unpredictable waters, vancouver island
← CAN I HAVE A WORD WITH YOU?
by Howard Richler
CARNAL KNOWLEDGE:
A Navel Gazer’s Dictionary of Anatomy, Etymology and Trivia
by Charles Hodgson
IN THE REALM OF HUNGRY GHOSTS:
Close Encounters with Addiction
by Gabor Maté →