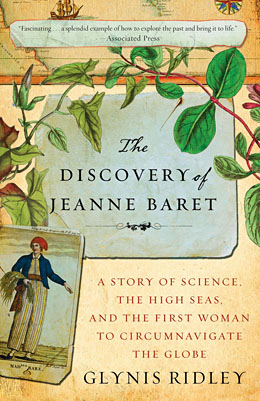 THE DISCOVERY OF JEANNE BARET:
A Story of Science, the High Seas, and the First Woman to Circumnavigate the Globe
by Glynis Ridley

In 1774 a 26-year-old French peasant woman named Jeanne Baret became, against all odds, the first woman to have circumnavigated the globe. In contrast to the fanfare that greeted the crew of the ship she first set out on, however, Baret’s accomplishment went virtually unrecognized.

If Baret’s achievement was remarkable, the circumstances surrounding it were nothing short of extraordinary. To get around a strict law that forbad women from naval vessels, Baret disguised herself as a man, going undetected until her ship landed in Tahiti 18 months later. There, the natives immediately recognized what over 300 of her fellow crewmembers had failed to: that Baret was a woman.

British historian Glynis Ridley has written a lively, penetrating account of a little known pioneer of travel and science. She recounts the unlikely set of circumstances that gave rise to Baret’s audacious breach of convention and paints a vivid picture of the exciting and challenging life she lived.

The book charts Baret’s inauspicious beginning as the daughter of illiterate day labourers from the Loire Valley; a class whose members typically never travelled more than 20 miles from their birthplace during their lifetimes. Baret’s own trajectory changed radically the day she crossed paths with Philibert Commerson, a rising star in the field of botany. A working class woman like Baret would normally never become intimate with a man as privileged as Commerson, who rubbed shoulders with some of the leading intellectual lights of the day, including Voltaire and Linnaeus, the founder of the binomial system of botany still used today. But Baret had something Commerson wanted: knowledge of the medicinal properties of plants.

Baret was a herb woman, a group that for centuries had supplied male druggists, and later botanists, with the dried plant specimens that were the basis of their practice. Ironically, most of these men, who considered fieldwork beneath their dignity, would have been incapable of identifying these plants in the wild.

Commerson hired Baret as his housekeeper after his wife died, and she soon became his lover. Baret became pregnant with Commerson’s child and the two moved to Paris to avoid the inevitable scandal.

In Paris, Commerson worked at the city’s botanical gardens while Baret took on the role of co-researcher. Marrying Commerson—who was as vain and arrogant as he was brilliant—was socially unthinkable, so Baret gave up their son to a foundling hospital shortly after he was born.

Commerson jumped at the opportunity to join France’s first circumnavigation of the globe as the expedition’s naturalist, and at some point he and Baret concocted the idea of smuggling her on board as his “gentleman’s assistant.” Ridley’s statement that “A female stowaway was a curiosity, but a female botanist was a breach in the natural order of things” puts into perspective not only the risk the couple took but also the absurdly limited place held by women in the “Age of Enlightenment.”

In its quest to become the dominant imperial power, France was increasingly looking to sciences such as botany for ways feed and clothe of the millions of slaves on whose shoulders its far-flung empire rested and to guarantee supplies of valuable commodities such as coffee and sugar. Theexpedition set out in 1766 under the command of Louis-Antoine de Bougainville, immortalized today in the showy climbing vine—the bougainvillea—that bears his name and which was likely discovered by Baret herself in Rio de Janeiro.

Ridley viscerally depicts the privations of life at sea, which would have been amplified for Baret. Frequent references are made to the “weeping dermatitis” caused by the restrictive bindings Baret used to keep her sexual identity secret. Baret would have also had to defend herself against the suspicions raised by her private toilet habits and by her behaviour during the hazing rituals endured by sailors crossing the equator for the first time.

Ridley dons her detective’s cap to sift through contradictory accounts of how Baret’s secret was finally revealed (Baret herself is silent on the matter) and in doing so uncovers the dark event that took place in its aftermath. It would be unfair to reveal here her chillingly well-argued conclusions.

Botanical names tend to endure longer than geographical ones—colonial place names often get turfed out along with the colonizers. Although she played a key role in the identification of hundreds and possibly thousands of species of flora, only one plant was ever named for Baret—and that has since been re-named. The clever ambiguity of the book’s title underlines the two-fold nature of Ridley’s aim here. The Discovery of Jeanne Baret is about Jeanne Baret’s discoveries, but it is mostly about our discovery of her.