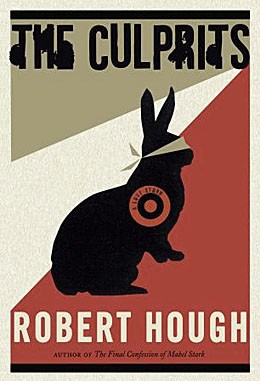 THE CULPRITS
by Robert Hough

Robert Hough’s excellent first two novels were both fictionalized accounts of real life events. His debut, The Final Confession of Mabel Stark, was based on the life of a legendary female tiger tamer of the same name and has been optioned for a feature film by actress Kate Winslet and her husband, director Sam Mendes. His follow-up, 2004’s The Stowaway, was one of the best Canadian novels of that year. It was a riveting account of the experiences of a Phillipine tanker crew that saved the life of a Romanian stowaway by hiding him from the ship’s merciless captain. 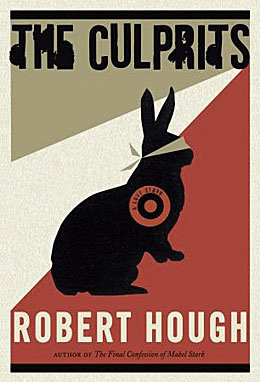 With The Culprits, Hough casts off the shackles of biography (although he continues to use real historical events as a framework) and plunges headlong into the sticky realm of mostly make-believe. Hough finds his muse, it just happens to be in the form of a dead, disfigured, half-Russian, half-Dagestani baby narrating the tale to his as-yet unborn half-sister, whom he cloying calls “little one.” Our unconventional narrator is also given to philosophizing. And melodrama. And many, many dramatic pauses. Like this.

And we, the readers, hope that this is only a temporary, tongue-in-cheek diversion; a whim; a fancy. Because, dear reader. Oh yes. It gets. Very. Annoying.

Not trusting his readers to recognize the device as such, however, Hough decides to batter them over the head with an apologia on the first page:

But I digress. I am overly dramatic. It’s my half-Slavic soul, drunk with attention. I’m a cranially enlarged Russian, with a soapbox to stand on. I apologize, I do; I’ll sober up, and quit harping, and get on with this blather.

Plot-wise, Hough is out of the gate running. His protagonist, the gormless, tinnitus-suffering Hank Wallins, is eking out a lonely, sedentary existence as a night-shift computer programmer at a large insurance firm in Toronto. After being nearly pushed to his death off a subway platform by a mysterious assailant one day, Hank resolves to end his isolation with a visit to a Russian matchmaking website that promises meaningful unions with tantalizing women. Hank’s own emotional baggage dictates that he seek the doppelganger to his only previous love: a French prostitute whose ability to extract money from her clients was equaled only by her innovative, athletic approach to her profession.

And so Hank meets Anya, a Marketing student in her early twenties desperate to get away from the dead-end prospects of her hometown, St. Petersburg. But Anya is also fleeing from her obsession with Ruslan, a young Caucasian Muslim whose rock-star good looks ensure he gets well past women’s vestibules in his summer job as a flower-deliverer.

Her move to the safe but staid streets of Toronto only heightens Anya’s sense of loneliness and purposelessness, however, and Hank’s doughy lack of charisma accentuates an unfavourable comparison with Ruslan. So when a ransom note arrives from Russia demanding twenty thousand euros for Ruslan’s release from captivity to a group of purported Chechen insurgents, Anya manages to extract the money from a desultory and deceived Hank and returns to Russia to free her true love.

The truth, naturally, turns out to be quite different. Ruslan has instead been captured and tortured by Russians believing him to be a Chechen rebel associated with the infamous Moscow theatre crisis. Reduced to a hollow shell of a man and beaten beyond recognition, Ruslan passively succumbs to the persuasions of an Al-Qaeda logistical support cell intent on vengeance. Hank is now in the unenviable position of having funded terrorist activities and everyone, it seems, is suffering some form of deception in the matter.

But Anya and Hank’s story is by no means finished as the plot continues to twist and fall back upon itself. The parts of the novel set in Russia are the book’s strongest, and Hough is clearly knowledgeable about his subject—an advantage somewhat offset by his tendency toward didacticism. There are some strained metaphors, and the accented dialogue often tends toward caricature (“is how you saying Is robbery on highway, no”). Hough exacerbates the issue by peppering his prose with syntactical inversions mimicking the Russian tendency to mangle English grammar, as in: “. . . all the sorrows in her world were by darkness swallowed”; or, “Hank then stood in the doorway as she around the room darted.”

At its core, the novel suffers from an uncomfortable—even irreconcilable—marriage between tragedy and what comes awfully close to being romantic comedy.  The Culprits is a disappointment, only because Hough has proven he can do far, far better.

Oh yes, dear reader. He can.