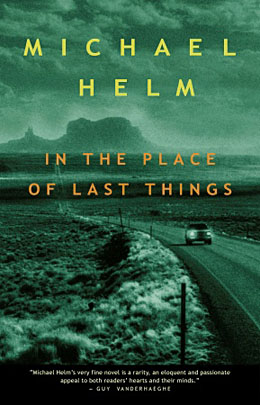 IN THE PLACE OF LAST THINGS
by Michael Helm

In the Place of Last Things is Michael Helm’s sophomore effort, arriving seven years after his Giller-nominated novel, The Projectionist. His new novel radiates out from Russ Littlebury and his relationship with his dying father, Mike. A legendary scrapper in his heyday until he found Jesus, Mike appears to have entered life as a lion and is soon to leave it a lamb. Russ, whose own proclivity for violence has a tendency to burst forth unexpectedly from his impassive surface, can only speculate about the now dormant side of his father’s personality that has so clearly planted its legacy in himself.

Russ is all contrasts. A physically intimidating, stubborn, and reticent man who’s dour and naturally introverted, Russ has a taste for classical studies. He seems most comfortable when he can explain himself indirectly by quoting his favourite philosophers or while lecturing the adults in his classroom on the history of Western thought. In small-town Saskatchewan, however, Russ finds his acquired knowledge an encumbrance, a “useless reserve” that seems wildly out of context.

It is only when he moves to Toronto for a teaching job and falls for fellow instructor Tara Harding that Russ finds all these reserves called upon. Tara is his intellectual match, and theirs is an intense and fraught relationship that both exhausts and provokes him. The relationship falls apart as Russ leaves Toronto to tend to his father, seeing no way to reconcile these two worlds.

Immediately following his father’s death, Russ drives his aunt down to her winter home in the southern U.S., where he meets Lea, the daughter of one of his father’s friends. Lea is obsessed with the idea of reuniting with Jack Marks, a shady drifter with whom she had a brief relationship, and Russ agrees to fulfill Lea’s wish to find Marks and deliver him a letter. Russ locates Marks in a motel in a seedy border town and sets up a daily watch of the drifter’s activities.

This section of the novel is the most compelling. Russ’s surveillance of Marks happens gradually and instinctively for motives that remain somewhat unclear yet understandable. Although he has many early opportunities to hand Marks the letter and leave, Russ continues to follow his quarry, becoming gradually implicated in his vague, criminal world. The passages here are played out with a deliciously sinister sense of foreboding that evokes the best qualities of literary film noir as Russ heads toward the inevitable encounter with Marks. Helm’s writing style combines an intense sobriety with a hard-nosed, at times inscrutable descriptive poetry reminiscent of Russell Banks.

The novel’s least convincing aspect is the relationship between Russ and Tara, which seems at once overly thought-out and emotionally underdeveloped, with dialogue that often sounds artificial and pedantic. The two are constantly testing each other to the point of negating their apparently undeniable attraction.

Despite this pitfall, Last Things offers a highly original, cleverly structured plot and often illuminating insights into the moral and emotional forces that drive our lives in times of crisis and transition.