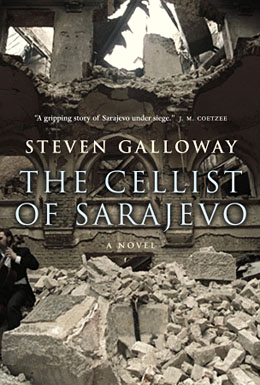 THE CELLIST OF SARAJEVO
by Steven Galloway

Vancouver’s Steven Galloway is a precocious writer of astonishing talent and creative imagination whose third novel lives up, in every respect, to the high bar set by his first two.

The Cellist of Sarajevo captures with taut, painstaking clarity the events and atmosphere surrounding the siege of Sarajevo in the 1990s, the longest in modern warfare. The novel’s linchpin is the true story of a cellist who resolves to play Albinoni’s Adagio on the same square every day for 22 days in honour of the victims of a massacre that took place there.

Chapters alternate between the perspectives of three primary characters. The most compelling is Arrow, a female sniper of extraordinary ability who is sent to protect the cellist from other enemy snipers. Conscious of her value, she limits her participation in the war – she will not, for example, target civilians. A code of ethics is her sole luxury.

The other two are 62-year-old Dragan, who has a coveted job at a bakery, and Kenan, a middle-aged man who lives like a hostage in his apartment with his wife and children, venturing out every few days only for water. Although they never meet, the two men have similarities – especially a shared fear, which they struggle against as witnesses to the daily acts of heroism carried out by their fellow citizens.

Galloway’s style is spare and unadorned – a mirror to the skeletal city and its emotionally numbed inhabitants. (“[Arrow] wonders what will be left standing when morning comes, whether there will be any noticeable difference in the appearance of the city. There must come a point where so much has been turned to rubble that ruining a little more makes no difference. It’s possible that point has already been reached.”) Everyone has a different perspective on the cellist’s motivation. They wonder aloud what he is trying to prove, beauty having become mostly a source of irony in their desolate lives. Lives are bound up in simple yet sometimes insurmountable tasks, such as trying to cross the street without getting killed. The dialogue is mostly internal because people have run out of things to say, their plight being too obvious for comment.

Galloway once again shows himself to be as gifted as he is fearless. If it weren’t for the fact that he teaches creative writing, I’d say it was time for him to quit his day job.

Comments: Comments Off on THE CELLIST OF SARAJEVO
by Steven Galloway Posted by: admin Categories: Adult Fiction, Reviews Tags: cellist of sarajevo, creative imagination, different perspective, noticeable difference, Quill and Quire, siege of sarajevo
← RISK:
The Science and Politics of Fear
by Dan Gardner
NOTHING TO BE FRIGHTENED OF
by Julian Barnes →