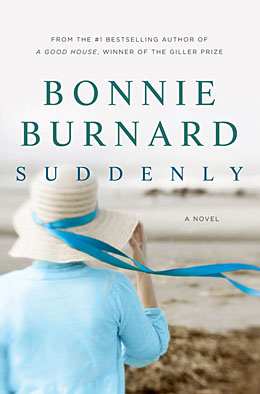 The subject matter of Bonnie Burnard’s new novel—a woman in the palliative stages of death from cancer—does not, at first shake, seem like a sure-fire crowd pleaser. Anyone who’s spent time at the bedside of the terminally ill might feel a natural reluctance at the thought of being dragged through a minor variation on that anguish once again. And the book’s title, Suddenly, with its melodramatic hint of implied ellipses, doesn’t help matters either.

But avoid this book at your own peril. It turns out there is no dragging of anyone here, no sticking anyone’s nose in anything, only the insistent coaxing of a thoroughly immersive read. By the time Suddenly truly hits its stride about halfway through, my assumed resentment had given way entirely to admiration for Burnard’s rippingly good characters and the deep intelligence with which she treats her ostensibly difficult subject.

The story’s main character is Sandra, a sixty-something mother of four grown children, who discovers a lump in her breast one summer. We quickly jump ahead four years, Sandra having come home to die after the failure of the usual treatments. By her side is her loving, stoic husband, Jack, whose history of heart problems gives Sandra’s predicament a tinge of unfortunate irony.

And then there are her two best friends. Jude, a sometimes peevish, re-married ex-hippie who raised her son singlehandedly, survived her own bout with breast cancer relatively unscathed, making her the designated beacon of hope in the early days of Sandra’s diagnosis. The other friend is the cooler, more turned-out Colleen, who is also Sandra’s sister-in-law by way of a childless marriage to her philandering doctor brother, Richard.

The flawed but galvanizing three-way relationship between these women, their radically different marriages, and their twenty-five years of secrets, jealousies, and wine-imbued revelations are the meat and gristle of the novel, the journals Sandra keeps by her bedside offering a narrative portal into their watershed moments. Burnard clearly likes her characters and, as a result, so do we. We invest enough in them that a tiff between Jude and Colleen after the funeral comes as a visceral shock.

Burnard is an expert cataloguer of what have become the normalized rituals of a good, wasp-ish North American death. There is the pile of  “hopeful, helpful books” in Sandra’s room, falling over each other with their uncracked spines. There is the fridge crammed with food from well-intentioned neighbours and the occasional, unwanted offering of religion as a balm.

Being with a dying person, Burnard shows us, is sad, but it can also be socially awkward, pharmaceuticals, homecare nurses and supermarkets having supplanted the role of the casual caregiver to some degree. In one scene, Sandra snaps at Jude then quickly apologizes after makes performs the “absent, irritating” gesture of rubbing Sandra’s forearm in a hapless attempt at comfort-giving.

More interesting is Sandra’s self-consciousness of the performance aspect of her dying; her need to die in a way that is true to character. She thinks: “People simply want their dying to say something familiar, or classic … Too much change at the end, dying change, proves beyond doubt that all along the woman people believe they know, the woman they watch and talk to, and now care for, has been nothing but spidery synapses, sparking or not sparking in the brain’s frontal lobes.”

Some of the book’s best passages describe Sandra’s coma state, which Burnard renders as a series of surreally disconnected images taken both from events happening in the room and from her past. With the skewed logic found only in dreams, they give a poetically discombobulated version of a life flashing before someone’s eyes.

The novel builds the past through the use of omniscient, layered perspectives—often of the same events—making Suddenly a bit like southwest Ontario’s answer to As I Lay Dying. For the most part this works, but there are times when the perspectives shift so often that figuring out whose head we’re in requires a kind of sodoku-like ability with pronouns.

It’s a minor inconvenience, however, given all that this novel, with its moving ruminations on death and friendship, offers us. Striking a tone neither maudlin nor tragic and using humour that’s a shade short of black, Burnard manages to surreptitiously ask big questions at unexpected times, as in the following passage, where Jude is deciding what to wear to the visitation:

“… Maybe reaching into your closet for something you feel comfortable wearing, the kind of thing you might put on for some normal evening, is just a sign of acceptance. Death taken as part of life. Or maybe, in throwing off the darkest rituals, in losing those antiquated, collective gestures of humility, people mean to say that death doesn’t deserve a damned thing, and especially not a costume. But, remembering her parents, and living through this day, she knows otherwise. Death should not be accepted, and it deserves everything.”