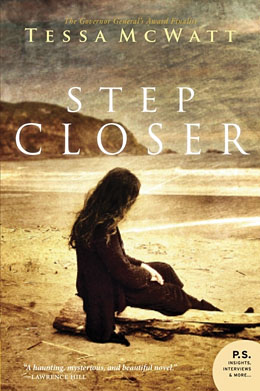 Step Closer, Guyana-born, Toronto-bred Tessa McWatt’s fourth novel, is also her first to break ties entirely with her native country in its setting. Like McWatt’s first three books, including the Governor General’s Award-nominated Dragons Cry, it deals with peripatetic characters whose movements between countries—in this case Spain, England, and Canada—are tied to restless quests for self-fulfillment. In the previous novels, identity was at stake. Here, the goal is one of atonement for misdeeds and tragedies of the past.

The character doing the bulk of the atoning here is Gavin Lake, a Brit of good breeding who, as a teenager on a school field trip, bore witness to their teacher being purposefully pushed to his death off of a cliff by a schoolmate. Worse yet, he goes along with the perpetrator’s plan to have a new black student, Marcus Williams, take the fall. Now an adult, and still tortured by his complicity, Gavin sets out to track down Marcus in Pamplona, Spain, in the hope of, if not forgiveness, then at least the chance to confess.

Gavin’s story is told to us by Emily, a young Canadian and roommate to the cagey, libidinous Marcus, who came to Spain as a way of putting his past behind him and rebuilding his identity. Somewhat confusingly, Emily’s narration takes place eight years later, at a point when she is living in a different part of the country with her boyfriend, Sam, a “rigorous scientist” who burns long hours studying the nature of viruses at the local university in the wake of the 1994 Indian Ocean tsunami.

Emily loves Sam, but feels she cannot focus on their relationship until her telling of Gavin’s story is complete. She too is haunted by an undisclosed trauma involving Gavin that occurred at the culmination of a hike together down the Camino de Santiago de Compostela—a well-known pilgrim’s trail. Writing Gavin’s story, she believes, will help her process the past, but in doing so she fails to take stock of Sam’s own increasingly erratic and, it turns out, insidious behaviour.

This is a novel that seeks to accomplish a great deal but falls victim time and again to its own ambitions. First off is the issue of empathy: the problems depicted never stop feeling like they belong to other people—partly because the characters doing the experiencing lack the warmth, frailty or appeal necessary for us to want to take their crises on as our own. In other words: they make it hard to care.

Frequent shifts from first-person narration to omniscience and back again cause confusion and feel too much like McWatt wants to have her cake and eat it too. It’s never entirely clear why Emily is telling us Gavin’s story — why not Gavin himself  Her justification comes off as overwrought: “I try to create an omniscience that suits my narration. I am implicated, so I must construct him meticulously.” As it is, we never get close to Gavin, and his desire for clemency becomes more like the whining of a persistent child.

More unfortunate still, McWatt chooses to dabble in a series of heavy-handed themes and motifs that only add to a growing feeling of torpor. The tsunami is tapped for its symbolic value, but its relevance to the story seems tenuous at best. There are frequent, weighty metaphors comparing the nature of the viruses that Sam studies and human behaviour, and the issue of animal rights surrounding the running of the bulls in Pamplona gets suddenly thrown in for good measure. The revelation, at the end, of the cause behind Sam’s strange behavior adds a fatal implausibility to the general wet-blanket vibe of the novel. In this case, it’s the spoiler that truly spoils.

The confrontation scene between Marcus and Gavin has moments of urgency, but the energy quickly fades. The words and notion of the novel’s title: “step closer” are repeated mantra-like at the end of many chapters, but steps is all this novel finally amounts to; it never gets enough momentum to hit a proper stride.