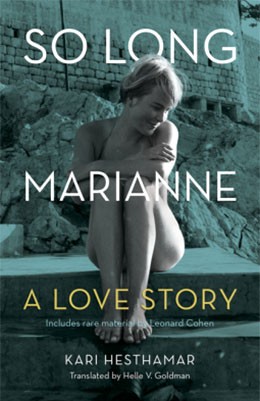 SO LONG, MARIANNE
by Kari Hesthamar

Marianne Ihlen has the rare distinction of having being muse to not just one but two famous men. She figures in the novels of writer Axel Jensen, with whom she moved from Oslo to the Greek Island of Hydra in 1957, when she was 22. Two years later, when Jensen abandoned the couple’s brief marriage shortly after their son was born, a not-quite-famous Leonard Cohen—who had just arrived on the island and was immediately smitten with Marianne—readily stepped up, and the two embarked on a relationship that endured for almost a decade. 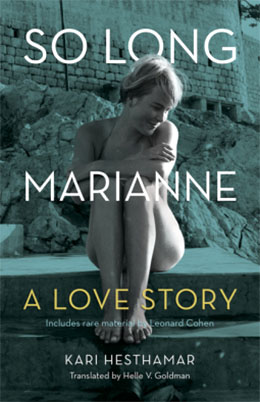 Kari Hesthamar’s slim volume (which was originally published in Norwegian in 2008 and appears in English via a seamless translation by Helle Goldman) moves from Marianne’s Oslo teenage-hood through to her and Cohen’s amicable breakup in the late ‘60s when his music career took off.

Though Cohen doesn’t show up until the halfway point, So Long, Marianne will appeal primarily to his legion die-hard fans wanting to fill in biographical gaps and read some of his previously unpublished poems. Yet the book’s great delight is Hesthamar’s sun-drenched evocation of life in Hydra during the years that it transformed into a Bohemian idyll for poets, painters and musicians from around the world.

Much of Marianne’s allure was her striking, Nordic beauty, which is apparent in the book’s lovely photos. That she was a good housekeeper who silently endured both men’s infidelities apparently helped too. Having forgone a career for love, Marianne was reliant on the book advances that fuelled her and her men’s lives. Where Axel was a spiritually restless alcoholic prone to fiery bouts of temper, however, Cohen—true to legend—was placid, gentlemanly and a loving surrogate father to Marianne’s son.

Hesthamar gives wonderful insights into the genesis of some of Cohen’s work. “Bird on the Wire” was his response to the sight of Hydra’s first telephone lines. Bizarrely though, there is no mention of the song that immortalized Marianne and that serves as the book’s title. Missing too is a sense of Marianne’s own voice; though the book is based on original interviews Hesthamar sticks almost entirely to the third person.

Leaping from the page are the era’s gender hypocrisies; her globe-trotting lovers’ urging that Marianne be “free” and “find herself” while under the constraints of single motherhood often seems like a self-serving blindness.

Comments: Comments Off on SO LONG, MARIANNE
by Kari Hesthamar Posted by: admin Categories: Adult Non-fiction, Reviews Tags: Non-fiction, Quill and Quire
← BLOOD WILL OUT
by Walter Kirn
US CONDUCTORS
by Sean Michaels →