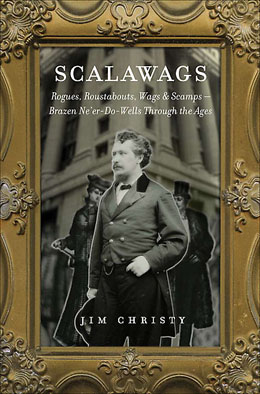 Introducing the subject of this —his 24th book — Jim Christy remarks: “There is an elusive, indefinable quality—it’s downright ineffable, in fact—that sets these people apart, places them in the special category that I call ‘scalawag.’”

What follows are 36 brief portraits of “gamblers and adventurers, con men and con women, rodomontades and ragamuffins, outright fools and outrageous liars” all of which originally appeared in the periodical Nuvo, for which Christy has written a regular column for over a decade.

The Scalawag, Christy declares, is a dead breed. Technology, security and the cost of living have conspired to make most of the exploits he recounts — many of them reliant on false identities, tall tales and chutzpah —impossible today. Consequently, the bulk of the scalawags portrayed here — only a few of which will likely be familiar to contemporary readers — lived between the mid-19th and -20th centuries.

About a third of them are women. They include the notorious actor Tallulah Bankhead, as well as Marchesa Luisa Casati, eccentric muse to the European modernists, whose 1919 portrait by Augustus John was once voted the most popular work in the AGO’s permanent collection. British-born Lady Jane Digby cast off the titles of baroness, countess and princess before settling on being Queen to a Bedouin sheik. But perhaps the most intriguing is the “shameless scoundrel and liar” Elizabeth Gilbert, who, despite being Irish, managed to pass herself off as exotic Spaniard Lola Montez after only a brief sojourn in that country. She traveled, had affairs with, among others, Franz Liszt and King Ludwig of Germany, and was a frequent instigator of barroom brawls, one of which culminated in her punching an Italian opera singer in the mouth.

There is, disconcertingly, a certain sameness to Christy’s female portraits stemming from the fact that virtually all of them relied on their feminine wiles as a bargaining chip for upward mobility. Given that their sexuality was their prime source of power, it should not come as a surprise that most of them met lonely, bitter ends, something that lends their stories a pathos absent in that of many of their male counterparts.

Christy’s male scalawags are a more varied lot. Sex, bigamy, and substance abuse are constant themes— apparently most scalawags’ egos are rivaled in size only by their libidinous appetites. Two of the best stories here have Canadian connections, those of Tillson Lever Harrison and Morris “Two-Gun” Cohen. Harrison, a physician Christy dubs the “greatest rogue in our history,” was a con-man and womanizer extraordinaire who nevertheless frequently risked his life tending to patients in (what were then) far-flung regions ranging from Trinidad to China.

Born a Jew in Poland, Cohen came to the prairies as a young boy after his first bout in reform school. After turns as a pimp and pickpocket, he was won over to the cause of Sun Yat-sen in China, and eventually — like Harrison — traveled there in 1922, killing a would-be assassin of the revolutionary leader, and becoming an arms-dealer for the cause.

There are the gunslingers, like Al Jennings, Ned Buntline, and Samuel Franklin Cody (son of Buffalo Bill); the boxer/poet Arthur Cravan; and the geniuses, like Charles Cros, credited with innovations as far-ranging as colour photography and stand-up comedy.

But the elephant in the room in all of this is author Jim Christy himself. An irrepressible adventurer and polymath, Christy has lived a life less, one would hope, scalawaginous (?!) but frequently more colourful than many of his subjects. A visual artist, spoken word performer and erstwhile actor, Christy has met two of men he profiles, including a wayward Russian Count whom he encountered while running away from his suburban Philadelphia home at the age of 12. As a youth, he rode freight trains, before coming to Canada in 1968 to avoid the draft. According to the book’s dustjacket, he also “found the supposedly mythical buried city of Olancho Viejo in the Honduran jungle and has been in the field with the elite government mine-clearing battalion of the Cambodian army.” Oh, and he’s also a successful crime novelist.

Christy’s style is wry, conversational and witty. He has an obvious love of language but a frequently roguish attitude to syntax and chronology that occasionally confounds. He more than compensates for this, however, by flinging around gems like: “His early life was one of privilege and self-indulgence; so was his later life” (said of British parliamentarian William Beckford). While some pieces inevitably shine more strongly than others, this is a book to be savoured in five-minute diversions, not prolonged sittings. As such, it will hold considerable appeal to dedicated bathroom readers, although, given its content, it is perhaps better suited to an outhouse than an ensuite and by that — unlike many of the characters in this book — I mean no disrespect.