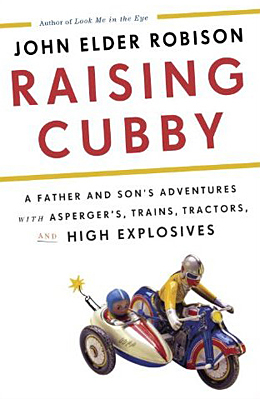 The maxim “it takes one to know one” doesn’t always apply to those with Asperger’s Syndrome, a form of high-functioning autism that entered the DSM in 1994 only to be unceremoniously given the boot from the latest edition, due out this year (Asperger’s is to be rolled into Autism Spectrum Disorder, or ASD). John Elder Robison discovered he had Asperger’s when he was 39, yet failed to recognize the symptoms in his young son Jack, aka “Cubby,” who wouldn’t get diagnosed for another fourteen years. By then, Cubby was 18 and about to go on trial in Massachusetts for serious charges related to the possession of explosives.

An awkward loner, Robison had a difficult upbringing in a highly dysfunctional family, which he chronicled in a previous memoir, Look Me in the Eye. His brother Augusten Burroughs did the same in Running with Scissors, which was subsequently made into a major Hollywood film. Robison dropped out of high school to pursue electronics, a passion he shared with his future wife, Mary (who would be diagnosed with autism after he and Cubby). After various gigs in the music and toy industries, including designing special effects guitars for Kiss’s Ace Frehley, Robison eventually started his own business restoring antique fine cars.

Robison approached the birth of his son as he did every aspect of his life: analytically and by assuming the worst (both symptomatic of the Asperger’s he still didn’t know he had). Mistrustful of authority, in the hospital Robison marked his newborn son’s toe with a Sharpie lest someone attempt to swap him for another child.

People with autism often have difficulty imagining others’ viewpoints, a characteristic referred to as a lack of “theory of mind.” Robison found parenting a baby challenging and unintuitive, so when attempts at comforting him failed to stop Cubby’s tantrums, Robison tried less conventional approaches, such as “yelling…or flashing my Maglite at him.” He often felt humiliated by others’ abilities to interpret his son’s needs when he was oblivious to them. And despite his own isolation as a child, Robison found Cubby’s lack of interest in other children “peculiar.”

As Cubby got older and became verbal though, Robison became, in many ways, an ideal parent. When Cubby showed an interest in trains, Robison wracked his brain to figure out how to get better access to them and concocted the brilliant idea of buying shares in the rail company. The combination of arriving in a gleaming white Rolls Royce while announcing themselves to be owners got Robison and Cubby warm, pre-9/11 welcomes not just at rail yards, but also at mines, power plants, and “most of the cool ships in Boston harbour.”

In his teens, Cubby’s interests shifted from trains to rocketeering and chemistry. By then, Robison had split from his wife, with whom he shared equal custody of Cubby. Bored by high school, Cubby dropped out and began experimenting with various kinds of chemical explosions, which he posted on YouTube. Though all Cubby’s materials were legally obtained and his interests purely scientific, Robison feared attention from federal authorities in what was now a less-forgiving, post-9/11 climate. When he banned Cubby’s lab from the house, Cubby promptly moved it to his mother’s basement.

Robison’s fears were well founded. In February 2008, authorities staged a multi-day raid on Cubby’s lab. Afterward, they condemned the house and sent Mary a bill for $10,000 to cover disposal costs. The stressful trial that ensued was led by a vindictive DA who wanted nothing less than to see 19-year-old Cubby—whose Asperger’s made it hard for him to understand why no one seemed to appreciate the diligence of his science—locked up behind bars.

As parents, we all have our blind spots. Robison’s funny, loving, and decidedly geeky account—one of a growing number by parents with autism—shows not only that someone with autism can make a great parent, but that there are many ways of becoming one.