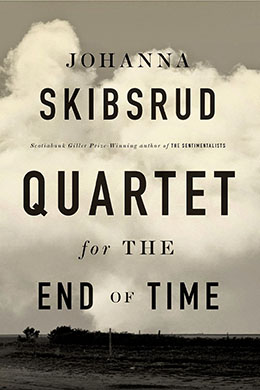 QUARTET FOR THE END OF TIME
by Johanna Skibsrud

In 2010, Johanna Skibsrud’s slim, bespoke novel The Sentimentalists made her the youngest winner of the Giller Prize. It was quickly followed by an excellent collection of short stories, This Will Be Difficult Too Explain. Her latest, Quartet for the End of Time, will no doubt be widely seen as a test of whether the native Nova Scotian can handle a “big novel,” which, at nearly 500 pages, it certainly qualifies as.

The title itself is borrowed from Olivier Messiaen’s famous chamber music piece of the same name, written and first performed when the French composer was being held in a German prisoner-of-war camp in 1941. Like its inspiration, the novel is divided into eight parts, one of which is an “interlude” consisting of a series of captionless historical photographs.

Over the course of its principal action, which begins in 1932 and ends in 1945, the novel cycles twice through the perspective of three characters: Sutton Kelly and her brother Alden, the children of a Washington judge, and Douglas Sinclair, who arrives by boxcar from Kansas with his father Arthur to join the thousands of unemployed veterans—known as the “Bonus Army”—who, in the midst of the Depression, camped and rioted on the Washington Mall to demand cash for the bonus certificates they received for their service in the Great War.

In the novel’s first half, Alden, who unlike his father is sympathetic to the Bonus Army’s cause, gets caught in an anti-government bomb plot. Judge Kelly quickly arranges to have Arthur framed for the incident by coopting Sutton into misidentifying him in a police lineup. Arthur subsequently “disappears” during a jail transfer.

Our three protagonists all scatter in the incident’s aftermath: Douglas roams the country in search of both work and his father while Alden flees for France and eventually gets stuck working for the Germans in occupied Paris. Unable to get over the guilt she feels for her role in Arthur’s disappearance, Sutton also searches for him, even after she winds up overseas as one of the war’s few female reporters.

As an admirer of Skibsrud’s previous work, I’m confident she has the chops to go the literary distance, but this distracted, meandering, at times opaque novel does little to advance her cause. Her choppily claused, digressional style, heavily influenced by modernists like Woolf and Proust, worked wonderfully on the small scale of The Sentimentalists, where it created an interesting tension with the novel’s Vietnam-era and present-day settings. Here though, it feels slavish, stodgy and at cross-purposes with the novel’s linear sprawl. Too often we get mired in sentences like this, which sound like a car sputtering on its last few teaspoons of gas: “Now, like everyone else, the Indian was out of work, but he still had his connections in Washington, and, once more, his services had—if unofficially—been enlisted.”

Skibsrud’s characters are unduly prone to profound realizations. They tend to express these gnomically, in weighty, abstract language. Various things are described as being both simultaneously themselves and their opposite, as in: “Its power was not in its destruction—but in its promise of something”; or “…and everything was, for a moment, utterly changed and changeless.”

Despite her fastidiousness about her craft, Skibsrud is still prone to amateur mistakes. Arthur’s long, detailed account of his escape from a Siberian prison is delivered over a campfire in a highfalutin literary voice indistinguishable from Skibsrud’s own; more problematically, it’s at complete odds with his previous utterances: “I gave that ticket to her daddy on the day we was married, so’s he could see I was good for it.”

On a broader level, the novel suffers from an identity crisis; namely, what do its loudly trumpeted ties to Messiaen’s apocalyptic vision have to do with the single incident (the Kellys’ betrayal of Arthur) that drives what scant plot there is? “Never was I listened to with such rapt attention and comprehension,” Messiaen wrote after his quartet’s inaugural performance. Regrettably, Skibsrud’s audience isn’t likely to react the same way.