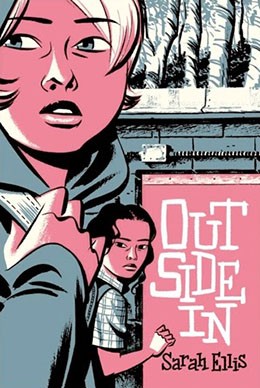 OUTSIDE IN
by Sarah Ellis

Sarah Ellis’ latest YA novel tackles issues of waste, consumerism and family in a Borrowers-style tale about close encounters between those who live in, and off, conventional society. 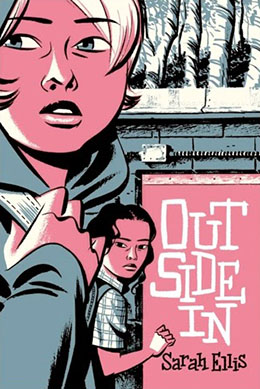 When she’s not posting feel-good affirmations in random places around the house, thirteen-year-old Lynn’s self-help obsessed mother Shakti has, ironically, been busy ruining her daughter’s life. Her failure to send off Lynn’s passport application means Lynn can’t go on the school choir trip to the States and an affair with a colleague’s drop-crotch-pants-wearing husband has led to Shakti’s boyfriend storming out and ending the most stable five years of Lynn’s life.

It’s in the midst of this crisis that Lynn has her first encounter with the Underlanders: an unorthodox, cobbled-together family led by Fossick, an ex-physics professor with a propensity for quoting Shakespeare. The Underlanders (who refer to their on-the-grid counterparts as “Citizens”) live clandestinely in “the cottage,” a bunker under the city’s reservoir, and survive entirely by means of bartering, recycling and scavenging.

Their isolation means that, despite their resourcefulness, the Underlanders lack social skills, and Lynn is perplexed but charmed when Blossom, a girl about her age who was rescued from a dumpster when she was a baby, openly practices the friend-making techniques she learned from a teen magazine on her. Lynn also gives Blossom insights into the behaviour of Blossom’s older brother Tron, currently in the throes of a teenage rebellion.

At the cottage, Lynn meets Blossom’s autistic brother Larch, who makes beautiful miniatures inside used toilet paper tubes that the family sells for food. The girls’ developing friendship and the Underlanders’ livelihood is threatened, however, when Shakti inadvertently blows their cover.

While some readers will find the alien-meets-earthling disconnect between Underlanders and Citizens a bit on the extreme side, Ellis mitigates encroaching disbelief with lots of easy humour. (When Lynn first meets Blossom, her biggest fear is that Blossom is living proof that the worlds portrayed in her mother’s flakey fantasy books are actually real.) The novel’s environmental message is also far less entrancing than Ellis’ wonderfully imaginative descriptions of the Underlanders’ steampunk existence.

—Emily Donaldson is a reviewer and editor in Toronto

Comments: Comments Off on OUTSIDE IN
by Sarah Ellis Posted by: admin Categories: Reviews, YA & Kids Tags: Quill and Quire, YA and Kids
← SMOKE RIVER
by Krista Foss
JULIET WAS A SURPRISE
by Bill Gaston →