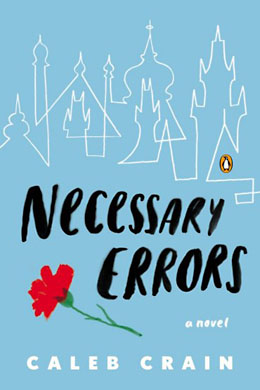 Like Venus rising from the foamy sea, Caleb Crain’s first novel, Necessary Errors, appears to have entered the world fully formed, wanting for nothing; though, at 46, the American academic and editor likely won’t be topping any “Best Young Novelists” lists.

In its focus on a group of young expats—one of them gay—trying to make a go of it in early ‘90s Eastern Europe, the novel is similar to Arthur Phillips’ Prague (2003) which, like this novel, wins us over not through muscular plotting but through its author’s wittily bespoke phraseology. The central gag of Prague was that it took place not in that generational “it” destination, but in Budapest. It’s Crain’s characters who get to live the dream.

Jacob Putnam, Crain’s protagonist, has ostensibly come to Prague to “write” though he’s also nursing wounds from the failure of his first relationship as an out gay man. He’s aware, too, of a deeper sense of purpose tied to the cultural zeitgeist. Jacob’s graduation from Harvard and his coming out coincided with Tiananmen Square, the felling of the Berlin wall and the Velvet Revolution “so that his first personal experience of adult freedom…seemed echoed by the wider world.” Jacob wants to capture the “spirit of change” and that, for him, means learning Czech, “from a Czech lover if possible.”

His first opportunity comes from Luboš, a dour man with a mysterious job that Jacob meets at T-Club, a subterranean gay bar with a random admittance policy seemingly aimed at him alone. Jacob keeps the relationship secret from all but one of his friends, an unlucky-in-love Irish teacher named Annie. Coming out, he fears, might mean an end to his camaraderie with the group’s male members.

But when the relationship with Luboš comes to an abrupt end about a third of the way through the novel, Jacob abandons his quest for a lover and gives himself over fully to the group. As he comes to value their collective chemistry, however, a melancholy sets in as he begins to dread their inevitable dissolution: “He wondered if this feeling was what had come to take the place of what he had once been seeking. The feeling that they were exceptional together. It was their being together that was exceptional, rather than anything any of them did or might do.” There’s a gentle irony to the fact that, though Jacob and his friends’ very presence in Prague signals the triumph of capitalism, it’s a kind of collective, socialist spirit that captivates them.

The dreaded unraveling process begins with the arrival of Jacob’s friend from America, Carl, whose charms prove too great for Melinda, the group’s den mother and the female half of its only couple. With the group in disarray, Jacob, having barely written a word, resolves to leave the following summer for graduate school in the States. He takes up—openly this time—with a second lover, Milo. And though he resolves to stay roguishly indifferent to the latter’s charms, the goal proves, in the end, futile.

Much of the novel’s copious, rich humour is to be found in Crain’ finely tuned ear for dialect. Jacob teaching English to a group of research chemists in wingback chairs is one of many highlights. But the novel’s nostalgic, time-seizing sensibility, it’s thwarted-writer/narrator, all powerfully—and favourably—recall Proust; Crain luxuriates in detail and dialogue to the degree that we often seem to move forward more slowly than in real time. When Annie tells the group about the Thomas Mann stories she’s reading it’s a description that could well be applied here: “I find I get quite lost in it…Nothing whatever happens for pages and pages, and one doesn’t mind somehow.”