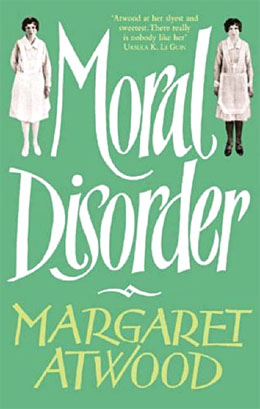 Unwary readers attempting to read Moral Disorder as a novel – an easy mistake given the lack of direction on the cover – do so at their own peril. Diligent readers who look at the flap copy will learn that the book is “a series of interrelated stories that trace the course of a life,” though there is much less of a continuous narrative here than even that suggests, since the voice and narrative approach change from story to story.

Moral Disorder is Atwood for readers who don’t like Atwood. Gone are the self-conscious literary conceits, the soul-numbing dystopias, the artifice. These are personal and domestic dramas played out in the onion-skinned layers of everyday life. A couple called Nell and Tig appear at various junctures in their lives. “The Bad News” introduces them in old age, paralyzed by the violence of the world outside their door. “Monopoly” sees them in their thirties as they attempt to forge alternative living arrangements with Tig’s ex amid the detritus of his first marriage.

Overall, the language is succinct and unencumbered, with only Atwood’s poetic and often mordantly witty use of simile pulling us out of the text from time to time. Sexual jealousy in the early seventies “was like using the wrong fork”; Tig’s first marriage “had a certain oversized and phosphorescent splendour about it, like a whale decaying on a beach.”

But it is the final two stories – ruminations on the decrepitude of Nell’s parents – that are the book’s master strokes. Here the withering of the body is denied only by the mind’s intense desire for the coherence of stories. “We all need our plots,” says a character in one of the tales. Atwood succeeds wonderfully here in demonstrating both the specificity and universality of that need.