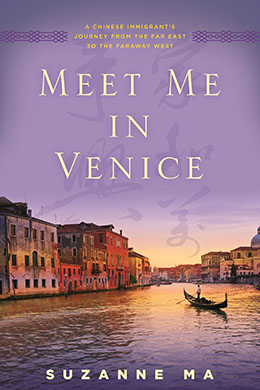 MEET ME IN VENICE:
A Chinese Immigrant’s Journey from the Far East to the Farawy West
by Suzanne Ma

“If you are born in Qingtian, you are destined to leave,” goes a famous, reverse-Hotel California refrain about this isolated Chinese county three hundred miles south of Shanghai. Migrants started leaving Qingtian in the seventeenth century and never stopped, many enduring years of painful separation from spouses or young children in their quest to become rich elsewhere.

Curious why this should be so, the Canada-born, U.S.-raised journalist Suzanne Ma, who is of Chinese ancestry and whose husband has roots in the area, moved to Qingtian in 2011 looking for answers. Over two years she also visited Chinese communities in six European countries, where she tracked the fortunes of Qingtian natives working exhausting, mundane jobs in factories and other businesses.

Our main focus is teenaged Ye Pei, who goes to Italy with her father and brother to reunite with her mother, who putatively left to take a job in Venice when Ye Pei was a child. Romantic visions of gondolas and canals quickly evaporate though when Ye Pei discovers that her mother abandoned her job in a suburban sweatshop long ago to work at a coastal mushroom farm. Ye Pei herself takes a job at a café run by the sour and prickly Ayi, but quits after a year to join her family. Brimming with entrepreneurial spark, her goal is to eventually open her own establishment.

This is a timely, often moving account whose impact is undercut somewhat by its awkward, middling length. At under 150 pages it’s long for an essay (despite this there’s some avoidable repetition) but short for a book; to wit, Ye Pei’s story ends just when we feel fully invested in it. Ma includes a few peripheral stories—like that of Carina Chen, who comes to Italy regularly to stock her fast-fashion shop in Spain—that are mildly diverting but don’t always add flesh to her story’s bones.

Despite its massive diaspora, Chinese culture is often impenetrable to outsiders and what Ma does do brilliantly is offer insights into the hearts and minds of Chinese migrants (or at least those of a certain stripe). Her descriptions of the conflicts that can develop between the Chinese and their Italian hosts (after a century of population exodus, Italy is now experiencing the stresses of becoming a receiving society) and between the migrants themselves, moreover, strike a chord for being at once specific and universal.

Comments: Comments Off on MEET ME IN VENICE:
A Chinese Immigrant’s Journey from the Far East to the Farawy West
by Suzanne Ma Posted by: admin Categories: Adult Non-fiction, Reviews Tags: Quill and Quire
← OUTLINE
by Rachel Cusk
THE EVENING CHORUS
by Helen Humphreys →