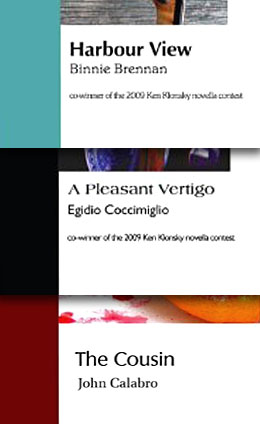 It’s a debate that rages on: is the novella a genre with distinct characteristics or simply an idiosyncratic, underutilized length? Is it a short story grown too big for its britches, or a novel run out of steam? Or is it a form whose time – in this impatient age – has finally arrived?

Having dubbed itself “the home of the novella,” Quattro Books presumably believes the latter to be true. And given that the novella is more common outside North America, it’s perhaps appropriate that Quattro’s self-proclaimed mandate is to provide an “inclusive” venue for both immigrant and Canadian-born writers. 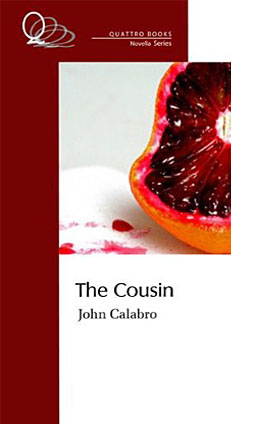 Of the three Quattro titles under consideration here, John Calabro’s The Cousin is the best written and the most successful at exploiting the form.

After a 30-year absence, Sal, a Toronto banker with antisocial tendencies, has arrived in his native Sicily for a vacation with his wife. Sal is deeply ambivalent about the trip, and the prospect of staying with his relatives  fills him with dread.

Age turns out not to have mellowed Sal’s foul uncle, who takes swipes at his son Charlie with both his acid tongue and his cane. Memories of Sal’s unhappy childhood flood back and so do other unwanted recollections, in particular his uncle’s rough seduction of his mother and her obvious lack of resistance.

Kept awake with these thoughts, Sal is entirely unprepared when he encounters Charlie in the washroom at night, convincingly cross-dressed as an attractive woman. Repulsed and intrigued, he allows himself to be spirited away to a gay bar on the back of Charlie’s Vespa despite declarations of his unwavering heterosexuality.

Drunk and high on unknown pills, Sal winds up in an encounter with a black transsexual prostitute, whereupon the story descends into Burroughs-esque surrealism as Sal is sucked into the prostitute’s entrails after attempting to disembowel her with a knife. It’s a bold, grotesque metaphor that works to a degree, but Calabro does such a competent job of establishing the plausibility of Sal’s situation that it’s hard not to crave a more earthbound account of his continued journey of self-revelation. 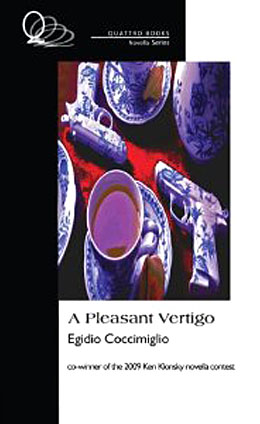 Sal’s problems originate in his past, but the protagonist of Egidio Coccimiglio’s A Pleasant Vertigo is focused squarely on his immediate future. Gerard Gordon, a painter caught up in the superficial fervour of the New York art scene, is struggling to get noticed after witnessing countless peers become overnight sensations. And Gerard has the golden ticket that can make it happen: an invitation to the prestigious Venice Biennale. But with the deadline looming, he still hasn’t found the thing that will “shock the art world.” He is also caught between the entreaties of two mercenary agents: the pompous Hans von Trapp and the unscrupulous Jeffrey Baumbach, both of whom are desperate for the attention of Walt Rainer, a billionaire art investor from the American South with a penchant for frog hunting and beautiful women.

When the opportunity presents itself to get in with Rainer, however, Gerard squanders it by getting caught in flagrante delicto with Rainer’s trophy wife, discovering along the way that he has been the victim of a scam by his erstwhile agents. He now sees Venice in a new light: as a chance to give both scoundrels their comeuppance.

The recent feeding-frenzy in contemporary art, with its monstrous price tags and fickle players, is surely a subject ripe for caricature and satire, but too often A Pleasant Vertigo comes off as cartoonishly madcap. It’s not always clear whether Coccimiglio is trying to be funny, ironic, or just campy. The book invests heavily in its pie-in-the-face conclusion, but the expected cleverness never transpires, and the ending falls flat. 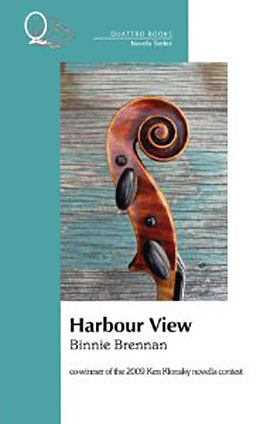 Binnie Brennan’s Harbour View, about the staff and residents of a Halifax nursing home, eschews plot for a series of mostly inward reflections by its various characters. Everyone here is lost in a wistful daydream – reveries broken only by the rattling of laundry carts or intrusive knocks on doors.

Brennan’s purpose appears to be to point out that the elderly once led lives as rich, if not richer, than our own. But too often her characters’ “revelations” come off as anticlimactic or merely prudish. Violet once posed nude for a painting when she was a student and makes the bold decision to reveal this to her niece; Dahlia was a lesbian – her “husband” Ronnie is really Veronica; Muriel’s husband is a drunk (but she wishes he wasn’t).

The hardest to take is Estelle, the black nurse who works with tireless, quiet dedication despite lingering prejudices. But by night, unbeknownst to her long-time colleagues, her passion is unleashed as a sequin-studded blues siren, the star of a local club. By presenting Estelle’s talent as greater for being kept secret, Brennan condescends to us and ultimately plays to stereotype. What kind of spurious martyrdom requires all of someone’s smiles to be “inward” ones? Why not tell your friends to come out to such a barn-burner of a show?

So what can we glean about the state of the Canadian novella from these samples? That a good book needs focus, polish, and structure – regardless of its length.